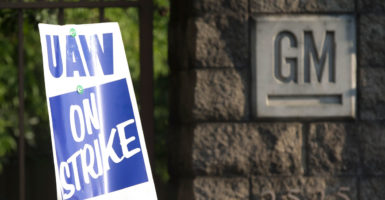 Resolving the strike against General Motors that began Monday may be harder because of an internal corruption scandal inside the United Auto Workers.

The strike officially began at midnight, when tens of thousands of workers walked off the factory floors of the multinational automobile manufacturing company headquartered in Detroit.

Vance Pearson, 58, the UAW’s Region 5 director, was arrested and charged Thursday with embezzlement, money laundering, and other offenses as part of a federal investigation, according to a report in the Detroit Free Press.

Pearson attended the union negotiations with General Motors on Sunday, which was three days after he was charged by federal prosecutors, the Detroit News reported.

A series of tweets from the Detroit News details Pearson’s participation and advisory role in the GM contract negotiations.

The Daily Signal sought comment from the UAW on the investigation, but the auto workers union had not responded at publication time. The union did release a statement Thursday addressing the allegations against Pearson, saying:

Our highest priority is maintaining the trust and confidence of United Auto Worker members. While these allegations are very concerning, we strongly believe that the government has misconstrued any number of facts and emphasize that these are merely allegations, not proof of wrongdoing. Regardless, we will not let this distract us from the critical negotiations underway with GM to gain better wages and benefits for the more the 400,000 members of our union.

The UAW, also headquartered in Detroit, claims to have more than 400,000 active members and more than 580,000 retired members in the United States, Canada, and Puerto Rico.

Pearson’s arrest is just one part of the story.

Agents also searched the home of Pearson, a former aide to Jones in Region 5. Pearson became regional director after Jones was elected UAW president in June 2018.

The federal investigation, now four years old, seeks to determine whether union leaders received kickbacks in exchange for providing businesses with contracts to produce “union-branded” items, according to the Free Press.

Most recently, federal investigators revealed that “four current and former senior officials” were complicit in acts of embezzlement, the Free Press reported. Federal officials have not explicitly named the targeted union leaders.

A complaint cited by the News says federal investigators found more than $30,000 in cash in UAW Official A’s home along with golf clubs the government said were purchased with union money.

Andrew Donohue, a special agent with the Labor Department, said in an affidavit that the investigation had found evidence of a “multi-year conspiracy” by UAW officials who sought to embezzle union funds for the purpose of acquiring “luxury items and accommodations” for their personal use.

“The outlay of the funds was not properly approved, was concealed from the view of the UAW members, and used for the personal benefit of the upper echelon of union officials who were elected to represent the members’ best interests above their own,” Donohue’s affidavit says.

The UAW’s nationwide strike, the first since 2007, involves about 46,000 General Motors workers.