Trump Fired a VA Official for Corruption. Then the VA Stepped in and Said Not So Fast. 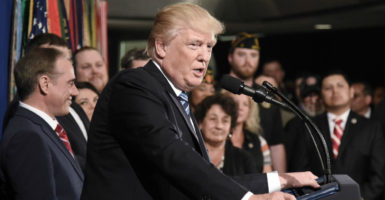 A Department of Veterans Affairs manager fired for corruption the first day of President Donald Trump’s presidency—to rousing acclaim from veterans who heralded it as a sign of lasting reform—has been returned to work by VA officials after he filed a civil-service protections appeal.

The return of the Puerto Rico hospital director is the latest example of Trump’s reform efforts encountering the entrenchment of what he has called Washington’s swamp, and comes in the same month a court ruled that the VA may not even be able to fire the Phoenix hospital director, who is a convicted felon as a result of job-related misconduct.

“On the morning of January 20, 2017, the Department removed DeWayne Hamlin, the director of the VA Caribbean Healthcare System, from the federal civil service. Mr. Hamlin subsequently appealed his removal to the Merit Systems Protection Board (MSPB), and because of particulars in his case that remains under active litigation, he was brought back to work at VA,” spokesman James Hutton said.

“As we have underscored since January 20, President Trump and Secretary [David] Shulkin have made employee accountability at VA a top priority, and we will continue to take appropriate disciplinary actions with our employees. The secretary in this case was not able to overturn this decision once he was made aware of it. We need this ability in new legislation.”

Hamlin was returned to work at the VA despite the attempted firing of whistleblower Joseph Colon, who alerted officials that Hamlin was arrested for intoxicated driving and found with painkiller pills for which he didn’t have a prescription. Diversion of opiates from the VA system for recreational purposes is a major problem at the VA.

Worse, when a subordinate enraged him by refusing to carry out the wrongful firing, that subordinate, Rosayma Lopez, was offered $300,000 in taxpayer money to quit—which would have been the largest settlement in recent department history. Lopez refused to take the cash.

The incidents were just one of many serious problems at the Puerto Rico veterans hospital Hamlin led, including chronic absenteeism. But even after all of those incidents, former President Barack Obama’s VA secretary, Bob McDonald, flew Hamlin to Washington to shape other managers in his image at a “Leaders Developing Leaders” seminar.

Hamlin was fired Jan. 20, the day of Trump’s inauguration. But numerous employees of the Puerto Rico VA said they were shocked and disgusted to see him return to the facility this month.

VA lawyers were coy, writing on May 9 that “No, Mr. Hamlin is certainly not back on his job … we are waiting on a new hearing date from the judge at the moment.”

But pressed to explain the sightings, Hutton acknowledged he was “brought back to work at VA.” Hutton did not say what his job title is, but he is not listed as the hospital’s director.

Shulkin has increasingly faulted the Merit Systems Protection Board for interpreting civil service rules in a way that blocks discipline of employees even when there is a slam-dunk case demonstrating severe misconduct.

He has pleaded for legislation making it easier for managers to deal with problem workers, but proposals have frequently stalled in the Senate under Committee on Veterans’ Affairs Chairman Sen. Johnny Isakson of Georgia.

Hutton said: “As this demonstrates, more needs to be done. VA will continue to work with Congress on priority legislation that will ensure the department can appropriately manage its employees at all levels, to ensure accountability, especially in cases when employees are derelict in their duties or fail to care for veterans.”

But Hutton did not respond to facts that suggest less-than-aggressive efforts by top VA officials to fire employees, rather than the Merit Systems Protection Board, may have a role in the return. Although the outside body does sometimes overturn discipline, it is up to VA managers to zealously build and prosecute cases.

In fact, the board has not even ruled on Hamlin’s case. And the case for firing that the VA presented did not even include some of the worst and most easily provable of his conduct.

“I do not know why the charges do not include my detail, the bribe he committed when he offered me $305,000 to quit, and other things such as his DUI. I feel that the VA did this soft proposal removal so he could return to the VA,” Lopez wrote to VA lawyers, according to emails obtained by The Daily Caller News Foundation.

The Office of Special Counsel, a federal agency that is separate from the VA, has taken multiple years to determine whether Hamlin’s actions constitute whistleblower retaliation.

It still has not ruled, and it is possible that the VA intends to fire Hamlin again once it can cite an outside agency as evidence. But it is unclear why the agency has brought him back rather than fight the existing Merit Systems Protection Board battle as aggressively as possible.

VA managers have frequently seemed inclined to fold when faced with the prospect of unwieldy litigation brought by fired employees—who sometimes use a loophole to bill their personal lawyers to taxpayers.

Former Deputy Secretary Sloan Gibson agreed to pay Japhet Rivera, a former Hamlin deputy, $85,000 to quit after he contested being fired by an Illinois hospital for rarely showing up to work, taunting an intern with the fact that he had sex with her mother–who was also an employee–and threatening to fire an employee who told on him.

Thanks to the fact that the VA agreed to a settlement rather than fighting for a firing, Rivera is now undersecretary of the Puerto Rico Department of Health.