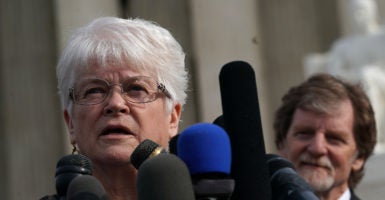 Barronelle Stutzman, a florist, says her faith precludes contributing her talents to a same-sex wedding. Behind her in this photo is Colorado baker Jack Phillips, who last year won a similar case before the high court. (Photo: Alex Wong/Getty Images)

A Christian legal group that specializes in religious liberty has asked the Supreme Court to reconsider the case of a florist who declined to provide flower arrangements for a same-sex wedding.

In June, the Washington state Supreme Court again ruled against Barronelle Stutzman, a businesswoman and great-grandmother who has said her faith did not allow her to contribute her talents to a regular customer’s wedding to another man.

“Barronelle serves and hires people from all walks of life,” Kristen Waggoner, senior vice president of the U.S. legal division of Alliance Defending Freedom, said Wednesday in a written statement.

“What she can’t do is take part in, or create custom floral arrangements celebrating, sacred events that violate her religious beliefs,” Waggoner said. “Because of this, the Washington Supreme Court upheld a ruling that threatens Barronelle with personal and professional ruin.”

Waggoner argued on Stutzman’s behalf before the state Supreme Court in 2016.

The U.S. Supreme Court had vacated the state high court’s ruling against Stutzman and ordered it to reconsider her case in light of last year’s Masterpiece Cakeshop decision. In that case, the court ruled that a Colorado civil rights panel was hostile toward Colorado baker Jack Phillips, who declined to make a custom cake to help celebrate a same-sex marriage.

Washington state’s high court came back with the same decision on Stutzman, “repeating verbatim much of what it said in its original decision,” according to Alliance Defending Freedom, which now wants the U.S. Supreme Court to reconsider the case.

Stutzman, 74, of Richland, Washington, faces fines for violating Washington’s anti-discrimination law by declining to provide and arrange the flowers from her shop, Arlene’s Flowers, for the gay customer’s wedding.

Waggoner said Stutzman’s Christian beliefs on marriage shouldn’t interfere with her First Amendment right to express herself as she chooses.

“Regardless of what one believes about marriage, no creative professional should be forced to create art or participate in a ceremony that violates their core convictions,” she said. “That’s why we have taken Barronelle’s case back to the U.S. Supreme Court.”

Stutzman’s case goes back to March 2013, when customer Rob Ingersoll asked her to provide floral arrangements for his wedding to Curt Freed. Another florist provided the service.