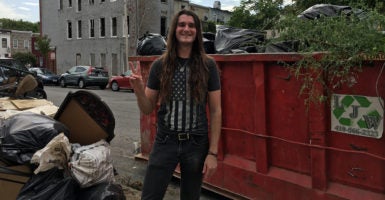 "We want to show the community we give a darn," says Scott Presler, pictured in West Baltimore during the second cleanup day he helped organize. (Photo: Virginia Allen/The Daily Signal)

Presler, a self-described conservative activist who gained recognition for his work on the Trump campaign in 2016, first organized a cleanup day in West Baltimore on Aug. 5, after the president’s much-publicized feud with Rep. Elijah Cummings, D-Md.

The response was so positive that Presler went back Monday with over 100 volunteers to pick up more trash.

The volunteers filled dumpsters with old mattresses, rotten boards, corroding metal, weeds, and other debri that formerly cluttered the streets and alleys.

“We want to show the community we give a darn,” Presler told The Daily Signal, “and we hope that this will be one of many cleanup days in the future to help the city of Baltimore, and just show we care.”

>>> Related: Streets Are Cleaner Because of This Conservative Activist

Presler, 31, grew up in Northern Virginia and now travels the country to do voter registration training. His work in Baltimore is quickly expanding beyond cleaning the streets to addressing some of the city’s other needs.

Presler tweeted last Wednesday: “50 Baltimore schools had to close early because they don’t have AC. So, after we are done picking up trash on Monday, we’re going to deliver fans to schools in need. If our government isn’t going to help, then it’s about time we do it ourselves.”

Presler said he received a donation of 20 air-conditioning units for schools in response to his tweet.

“We saw that there was an article in the Baltimore Sun that 50 Baltimore schools had to close early because it was so hot,” Presler told The Daily Signal, adding:  “A generous donor is offering 20 AC wall units to give to needy Baltimore schools. We know that the city of Baltimore needs help, not only with trash but also with AC. … We are just trying to help wherever we can, however we can.”

After seeing Presler’s work in Baltimore in early August on social media and in the news, volunteers came from as far as Kansas City, Missouri, with shovels, rakes, and work gloves. Some offered to haul trash in their pickup trucks.

When asked why they decided to spend a Monday picking up trash on Baltimore’s streets, volunteers told The Daily Signal that it is time for the city to get the help it so desperately needs.  Here is what six of them said:

“People don’t really know what is going on and they don’t know how bad it is. We have taken out so much trash just from this one street,” said Helena, who did not give her last name. “We have had people come from their own houses and say they want to help clean their own community.”

“So it’s nice to give them some motivation and let them know that people do care about their well-being.”

“It is one small step in trying to rebuild America, one piece of trash at a time.”—Paul Danaher, Kansas City, Missouri

“Scott [Presler] has everybody fired up and instead of just complaining, [we] might as well do something about it,” Danaher said.

“I saw Scott [on the news] when he came to Baltimore last time, and he said he was coming back to keep a promise and I thought, you know what, I’ll catch a flight out this morning and I’ll fly back to Kansas City tonight, and see what I could do to help. Baltimore could be a great city again.”

“Our president said, ‘Let’s make America great again,’ so let’s clean up what we have first.”—Kenny Enron, West Baltimore

“This is my second time out here. We had a great impact on getting this area cleaned up. It seems like it did stay clean. So we are back again … just doing what we should do,” Enron said.

“Baltimore used to be beautiful, it used to be a great place to come to. Once it gets cleaned up, I think it can be that again.”—Greg Stewart, Washington, D.C.

“I am here to support the neighborhood. I was here for the last cleanup about a month ago,” Stewart said. “We just made such a positive influence cleaning up the neighborhood. Twelve tons of trash in 12 hours is just embarrassing.”

“A lot of the trash that we pulled out [last month] was from illegal dumping. But in a low-income community, they lack the resources to be able to afford trash companies coming in to be able to haul [the garbage] off.  … So the people are really excited and happy that we are back.”

“Who wants to live in squalor? It is against the dignity of human nature.”—Dominique, Springfield, Virginia

“I feel that it is important that everybody do their part to help their fellow man, and that is why I am here today,” said Dominique, who did not give her last name. “It doesn’t matter where you live, you want to live in an environment that is safe and clean; so that is why we are here. I know this is just a small piece of the puzzle, but at least it’s a start.”

“A lot of them feel like they have been forgotten, so we are here to tell them and their city, ‘No, we have not forgotten about you.’”—Greg Aselbekian, Washington, D.C

“I am here to clean up the city, which has been abandoned by political leaders. The city has just been left to crumble and decay,” Aselbekian said. “We are here to make a difference, [to] try to clean it up and make it look a little bit better.”

“It may not look like much, but we are doing cleanups every month or so and every block we hit is one step closer to making Baltimore look a lot better. When residents, who have been left basically abandoned, look out the window and see a group of people trying to clean up their city, it gives them hope.”

Virginia Allen is a contributor to The Daily Signal. Send an email to Virginia.