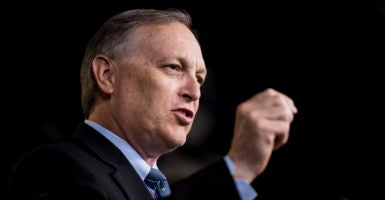 Rep. Andy Biggs, R-Ariz., new chairman of the House Freedom Caucus, says he has some big plans for what he’ll accomplish in the role.

“We must fight against increased government spending and for a balanced budget. We must fight for border security and the elimination of all loopholes that incentivize illegal entry into this nation,” Biggs said in a statement released Tuesday by his office.

Biggs, elected earlier Tuesday by his colleagues in the conservavtive caucus, said he is committed to working with President Donald Trump to advance its priorities.

“We must work to lower health care costs and improve access and quality for all Americans,” he added. “We will stand with President Trump as he keeps his promises to the American people. And we will never forget the people who sent us to Congress to work on their behalf.”

Biggs, 60, lives in Gilbert, Arizona, a town in Maricopa County southeast of Phoenix. He won election to the House of Representatives in 2016 after serving in the Arizona House and Senate.

Biggs replaces Rep. Mark Meadows, R-N.C., as chairman. The caucus was created in January 2015 by its first chairman, Rep. Jim Jordan, R-Ohio, and Biggs thanked both men for their leadership.

“The House Freedom Caucus has created a national reputation by standing up for Americans who have felt that they didn’t have a voice in Congress,” Biggs said, adding:

Great leaders like Jim Jordan and Mark Meadows have fostered a caucus that is a force for conservative principles, and I am thankful for their continued leadership and mentorship. I’m also thankful to my predecessor, Matt Salmon, who as one of the founding members of the Freedom Caucus laid the groundwork for the future of this caucus.

The Freedom Caucus, which keeps no official roster of its members, is well known for its opposition to the Washington political establishment.