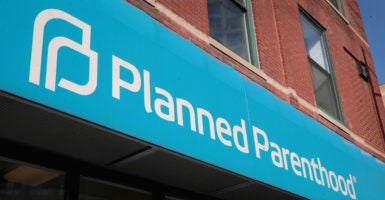 Two Cincinnati, Ohio, clinics will be closing after Planned Parenthood formally withdrew from Title X program in August, thereby forgoing about $60 million a year. Pictured: A sign hangs above a Planned Parenthood clinic on May 18, 2018 in Chicago, Illinois. (Photo: Scott Olson/Getty Images)

The Cincinnati, Ohio, clinics will be closing after Planned Parenthood formally withdrew from Title X in August, thereby forgoing about $60 million a year.

A Planned Parenthood spokesman told ABC News that the Cincinnati clinics that are closing are in Springdale and Western Hills. The last day for services to be offered at the clinics will be Sept. 20, according to ABC. Neither location performs abortions, the publication reports and the closures will leave Cincinnati with five operating clinics.

“These closures are the result of years attacks on our ability to provide reproductive health care,” said Kersha Deibel, president and CEO of Planned Parenthood Southwest Ohio Region in a statement to ABC.

“Ohio politicians have passed 22 anti-reproductive health measures in recent years, including a defunding bill that went into effect earlier this year. Then came the changes to the Title X program, from an administration that has made it clear that it wants to force out trusted health centers that provide evidence-based, comprehensive reproductive health care.”

“These layered attacks in a hostile environment forced us to make some really tough decisions,” she added in the statement.

Republican Ohio Gov. Mike DeWine signed S.B. 23, a bill banning abortions after a baby’s heartbeat can be detected, in April.  Doctors who performed abortions could face fines of up to $20,000 under S.B. 23. A judge issued a preliminary injunction in July temporarily preventing the heartbeat bill from going into effect.

Planned Parenthood withdrew from Title X after Planned Parenthood officials petitioned for a stay against the Trump administration’s Title X rules in an Aug. 14 letter to the U.S. Court of Appeals for the 9th Circuit.

The organization said it would pull out of the family planning program unless the court intervened.

“We will not be bullied into withholding abortion information from our patients,” said acting Planned Parenthood President Alexis McGill Johnson on a call to reporters in August, according to Politico.

Family planning clinics that refer women for abortions will be stripped of their Title X funding, according to a measure Trump’s administration instigated, CBS News reported.