EXCLUSIVE: Secretary of State Calls on Iran to Act Like a ‘Normal Nation’ 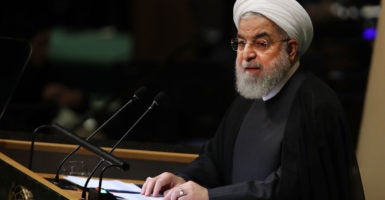 President Donald Trump has perplexed some critics by saying he would be "happy" to meet with Iranian President Hassan Rouhani in less than two weeks at the United Nations, Secretary of State Mike Pompeo says. Pictured: Rouhani addresses the U.N. General Assembly on Sept. 25, 2018, in New York City. (Photo: Spencer Platt/Getty Images)

“They need to change, they need to become a normal nation. When they do that, we can see a brighter future for the Iranian people,” Pompeo told The Daily Signal in an exclusive interview.

President Donald Trump has said he is open to meeting with Iranian President Hassan Rouhani on the sidelines of the session of the United Nations General Assembly that opens Sept. 17 in New York.

As for the prospect of Trump’s meeting with Rouhani, Pompeo said: “Look, the president said he’s happy to meet with him; he’s happy to have a discussion.”

The Washington establishment sometimes stares at that and says, ‘Oh, my goodness, they’re getting a meeting … boy, that creates power for them.’ The president sees it differently.

Despite speculation that Trump will seek to meet with Rouhani at the U.N., Iranian leaders in the past have rejected such outreach from the president, Politico reported.

“Anything is possible,” the president told reporters Wednesday at the White House.

Israel President Benjamin Netanyahu, who opposes such a meeting, said Thursday that he doesn’t tell Trump who to meet with, The Times of Israel reported.

“The possibility of a meeting between Trump and Rouhani exists,” Netanyahu told reporters after he met in London with British Prime Minister Boris Johnson. “I don’t tell the president who to meet.”

As he left for London earlier Thursday, the Times reported, Netanyahu advocated more pressure on Iran, not less.

“This is not the time to conduct talks with Iran,” he said.

In May 2018, the U.S. withdrew from the 2015 nuclear agreement with Iran’s Islamist regime, a document known as the Joint Comprehensive Plan of Action, or JCPOA.

The Trump administration said the Obama-era deal didn’t do enough to curb Tehran’s destabilizing behavior across the Middle East, its support of terrorist groups, or its ballistic missile program.

Also, the agreement called for many of the restrictions on Iran’s nuclear program to be lifted after 15 years. President Donald Trump repeatedly has criticized those so-called sunset provisions, saying they would allow Tehran to acquire a bomb in the not-too-distant future.

Speaking with The Daily Signal, Pompeo singled out the risk of nuclear proliferation as a “fundamentally different” national security challenge than all the others facing the United States today—and a top priority for the Trump administration in an era already chock-full of geopolitical crises.

“A conflict that ends up resulting in nuclear conflagration … the risk is of a different magnitude,” Pompeo told The Daily Signal. “And so we’ve spent a lot of time on issues like preventing Iran from getting a weapon system and to try and convince the North Koreans to denuclearize, and then a broader range of proliferation issues to take down the nuclear threat.”

As part of Trump’s so-called maximum pressure campaign against Iran, renewed American sanctions have targeted the Islamic Republic’s financial and industrial sectors, more than halving the country’s daily oil exports to around 1 million barrels in the process.

The International Monetary Fund predicts Iran’s economy will shrink by about 6% this year—an abrupt reversal from the Islamic Republic’s 4.6% growth rate in the previous fiscal year.

Inflation is pegged at about 30%, and Iran’s budget deficit has widened to a record 62% shortfall in revenue.

In short, Tehran is running out of cash while inflation is accelerating. The nation’s economic tailspin is evident in nearby Iraqi Kurdistan.

The number of Iranians traveling to the autonomous Kurdish region in search of work has increased this year. Also apparent: a surge in the number of Iranian Kurds crossing the border into northern Iraq to join the ranks of a network of exiled Kurdish Iranian militias that have waged an on-again, off-again guerilla war against the Iranian government for decades.

“Most young people in Iran think that the sanctions will bring down the regime,” said Shaista Mohammed, 19, an Iranian Kurd who says she fled to Iraqi Kurdistan in 2018 to take up arms with an exiled Kurdish opposition group.

“The U.S. sanctions have helped our cause. If the people feel like they have the support of the U.S., there’s a very good chance of revolt,” Mohammed told this correspondent during a June interview in Iraq.

In a May 2018 speech at The Heritage Foundation, Pompeo outlined 12 concrete actions Iran needs to take for the U.S. to ease sanctions.

Pompeo’s demands spanned the gamut of Iran’s activities. He called on the regime to suspend its support for Lebanon-based Hezbollah; end its destabilizing activities in Iraq, Syria, and Yemen; release detained U.S. citizens; stop the proliferation of ballistic weapons; and abandon its nuclear weapons program.

“The length of the list is simply a scope of the malign behavior of Iran. We didn’t create the list, they did,” Pompeo said in the speech, adding: “Any new agreement will make sure Iran never acquires a nuclear weapon, and will deter the regime’s malign behavior in a way that the JCPOA [nuclear deal] never could.”

However, Trump went on to offer a notably more succinct summation of America’s expectations from Iran than those previously enumerated by Pompeo.

“We’re looking for no nuclear weapons, no ballistic missiles, and a longer period of time. Very simple. We can have it done in a very short period of time,” Trump added, referring to the deal’s sunset provisions.

Speaking with The Daily Signal, Pompeo made clear that the U.S. remains committed to the 12 requirements he laid out last year. He underscored that Iran’s longtime financial support for Hezbollah, which the State Department has designated as a terrorist organization for nearly 20 years, remains a key roadblock.

In the end, we have laid out the fact that we want the revolutionary regime to behave like a normal nation. And we have implemented a set of what have proven very effective policies to deny them the resources to continue their terror campaign around the world—to make really tough decisions about whether to underwrite Hezbollah, and if so by how much.

In a March speech, Hezbollah Secretary-General Hassan Nasrallah declared that the Lebanon-based political-military organization was bankrupt. It was a signal, some experts say, that U.S. sanctions have dented Tehran’s ability to sponsor its proxies.

“We’ve seen Hassan Nasrallah have to pass the hat,” Pompeo said, adding that the U.S. is still working “to deliver the outcomes” he listed in his speech at Heritage.

On June 20, Iran used a surface-to-air missile to shoot down a U.S. RQ-4A Global Hawk unmanned aerial vehicle. Trump authorized retaliatory airstrikes, but reportedly called them off with only 10 minutes to spare.

Ultimately, the U.S. opted for a retaliatory cyberattack instead.

The threat of a conventional military confrontation has since eased, U.S. officials say. However, the region remains on edge.

Under pressure from U.S. sanctions, analysts say, Iran has purposefully ratcheted up its so-called gray zone activities to spur European leaders into making concessions on sanctions.

To that end, Iran has resorted to unconventional attacks by proxies, as well as nonlethal acts of aggression such as the sabotage of oil tankers and pipelines.

To ease tensions and to keep Tehran from pulling out of the nuclear deal altogether, France floated a proposed $15 billion credit line. On Wednesday, however, the U.S. slapped additional sanctions on Iran’s so-called oil-for-terror network.

The new measures target Iranian-owned oil tankers and firms, which the U.S. Treasury Department says are controlled by Iran’s Quds Force, an elite military force the U.S. has classified as a terrorist group.

With the rollout of new American sanctions, France’s gambit for sanctions relief is likely dead in the water, experts say.

“We’re trying to do the things necessary such that that regime’s behavior will ultimately change,” Pompeo said of Iran in the interview.