What the Third Amendment Teaches About Individual Rights and Responsibilities 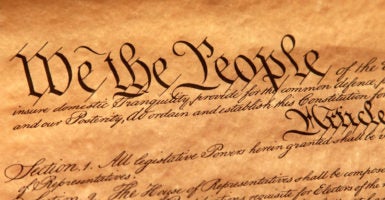 The Third Amendment protects Americans from having troops stationed in their homes during peacetime without due permission. (Photo: iStock Photos)

Colleen Sheehan is professor of political science and director of the Matthew J. Ryan Center at Villanova University. She is a member of the Council of Academic Advisors of the B. Kenneth Simon Center for Principles and Politics at the Heritage Foundation. She is also an advisory council member and senior scholar with the Jack C. Miller Center for Teaching America’s Founding Principles and History.

I don’t think I’ve ever heard anyone say that the Third Amendment is their favorite one—not even the most geeky law student I have known. Honestly, no one pays it much attention.

The Third Amendment reads: “No soldier shall, in time of peace be quartered in any house, without the consent of the owner, nor in time of war, but in a manner to be prescribed by law.”

Most people have heard of the idea that “a man’s home is his castle.” This is a phrase used by Englishman Sir Edward Coke, indicating a basic right of home and property that government should not infringe upon (“et domus sua cuique tutissimum refugium”).

Our homes are not only our legal, physical property, but our refuge—something much more than what is today called a “safe space.”

James Madison, the prime sponsor of the Bill of Rights, drew an analogy between the Third Amendment and the right he considered the most fundamental of all, the freedom of conscience.

Just as we possess rights of property, he argued, we possess a property in our rights. In this sense, conscience is the most sacred of all property:

To guard a man’s house as his castle, to pay public and enforce private debts with the most exact faith, can give no title to invade a man’s conscience which is more sacred than his castle, or to withhold from it that debt of protection, for which the public faith is pledged, by the very nature and original conditions of the social pact.

I think what Madison meant by a “debt of protection” was that American citizens—in fact, citizens of any free nation—possess not only rights, but responsibilities.

In other words, we should not only expect our government to protect our rights, but, by the very nature of the social compact we formed as free and equal human beings, each of us has pledged to defend and protect the rights of others.

This is part of what it means to be human and to be free to make choices. In choosing freely, we understand that the choices we make bring in their wake certain responsibilities toward others.

In the sovereign act of forming a civil society with other human beings, we take on the duty and active civic work to protect them in their equal possession of rights and liberties. This is concomitant to our own rightful exercise of freedom.

In the 10th Federalist, Madison argued that the rights of property originate in the “diversity of the faculties of men.” To protect a man’s house and physical property is, then, an extension of protecting the free exercise of his mind and faculties.

As such, a person’s home is not a mere dwelling, it is an edifice of their work and energy and perhaps dreams, for themselves and for their families, and for all of their friends and neighbors with whom they share their hospitality. It is their refuge, a haven that government has no right to invade.

The poorest man may in his cottage bid defiance to all the forces of the crown. It may be frail—its roof may shake—the wind may blow through it—the storm may enter—the rain may enter—but the King of England cannot enter.

To understand the Third Amendment to the Constitution, we would do well to appreciate its basis in not only English law but in Lockean natural rights, and thus see the connection it has to both the Fifth and Ninth Amendments, which are also rooted in the natural rights of the individual.

In giving thought to the background of this amendment that no one pays much attention to these days, we might gain a fresh view of its importance.

The Third Amendment is grounded in the idea that some things are beyond the scope of government—that free, popular government must be limited government.

For the same reason that government has no business interfering with a man’s conscience, it has no business invading his home. In fact, just the reverse is true: Government—and the sovereign people who establish government and give it power—has a duty to protect individual rights of property and property in rights. The violation of anyone’s rights, Madison taught, should be considered a violation of everyone’s rights.

In the present time in which some Americans are calling for socialism and believe that private property is largely based in greed and indifference to the plight of fellow citizens, we should take note that the leading American defender of private property and free enterprise, Madison, would have soundly rejected this perspective.

Madison believed that the protection of private property, like the freedom of conscience, is rooted in human freedom. Both are derivative from the essential freedom of the human mind and both are rights that bring in their wake certain responsibilities.

In the economic realm, Madison promoted the principle of “competency,” which means that there ought to be limits to our desire for accumulating material property.

In recognition of and respect for the equal rights of others, citizens are taught the limits on their own liberties and the habits of political and economic moderation. It is not a great distance to go from moderation in one’s own desires to generosity for the needs of others.