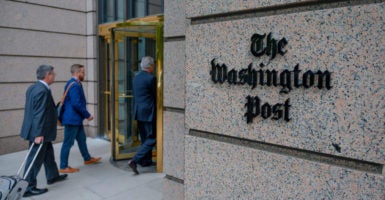 The building of The Washington Post newspaper headquarters is seen on K Street in Washington, D.C., May 16, 2019. (Photo: Eric Baradat/AFP/Getty Images)

Left-wing writer Marissa Brostoff penned an op-ed for the Post accusing the mainstream pro-life movement of aligning with white nationalists.

“Our people aren’t having enough children to replace themselves. That should bother us,” Brostoff quoted Vance saying. “Vance did not spell out exactly who was included in the word ‘our.’ He didn’t need to,” she concluded, implying that he was stoking fears about white birthrates specifically.

The Post added an editor’s note after a backlash: “An earlier version of this story suggested that the author J.D. Vance lamented a falloff in white births; he was actually talking about American births.”

A spokesman for the paper declined to provide additional comment.

Contrary to Brostoff’s portrayal of Vance, the conservative author is in an interracial marriage and has a biracial son.

The misleading op-ed was widely denounced as a smear among conservatives, who pointed out that white nationalists like Richard Spencer often support abortion as a means to limiting minority populations.

Declining domestic birth rates in highly industrialized nations is a major public policy problem and branding it racist to talk about it is a non sequitur. Mind-numbing and silly.

Washington Examiner writer Tiana Lowe wrote that “it’s hard not to conclude that Brostoff’s piece was an intentionally vicious attempt at character assassination.”

National Review’s David French, who defended Vance as “a good man,” wrote: “The Post has published a number of pieces that lump prominent conservatives together with truly vile racists they oppose and that lump them together without the slightest shred of justification. Disgusting.”