How George Washington Warned Us About Tribalism and Disunity 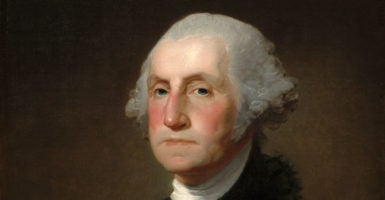 Sept. 19 is the 222nd anniversary of the publication of President George Washington’s Farewell Address. Appearing in newspapers nationwide, it announced Washington’s intention to retire from public life after his second term.

For most of American history, the Farewell Address was required reading in grade schools across the nation and was continually invoked in the public discourse.

Yet in recent decades, the address has faded into obscurity. That’s a shame, as it is a treasure trove of wisdom from the man who did the most to create our country—who knew, as well as anyone else, what it took to create a modern, large-scale republic.

After all, it was Washington who led the nation through the War of Independence, oversaw the drafting of the Constitution, and served as its first president. Washington addressed the document specifically to the American people—not just to policymakers—and recommended that they give his advice their “frequent review.”

The Farewell Address is mostly known for its warnings against political parties and entangling alliances during the nation’s youth. Certainly, Washington made those points, and offered practical advice on a wide array of other subjects. They include making permanent the powers of the federal government, obeying the Constitution, being sensible in public spending, accepting the necessity of taxes, and cultivating peace with other nations insofar as this was possible.

Wise though these recommendations may be, they underscore deeper philosophical arguments. To reduce the document to mere policy prescriptions misses the point. Besides, not all of them were meant to last forever.

Washington published his address when the United States was an infant nation, surrounded by European superpowers. His recommendations were intended “to gain time to our country … to progress … to that degree of strength … to give it … command of its own fortunes.”

Although Washington advised cultivating peace for a time, he envisioned an America that one day could “choose peace or war, as our interest, guided by justice, shall counsel.” America would have greater freedom in due time. Policies would change as circumstances change.

If that’s the case, what can we today gain from reading his valedictory message? The answer lies in something Washington knew very well—something that hasn’t changed since 1796: human nature.

Washington strongly believed in the depravity of mankind. He identified a “love of power … which predominates in the human heart.” In his eyes, man could be “ambitious and unprincipled,” but even worse, he is “designing”—in other words, deceitful and scheming. Man often hides his depravity under the veneer of virtue and love of country. Washington described men as “cunning” and called for the American people to “guard against the impostures of pretended patriotism.”

If man is corrupt, it only follows that nations are as well. Washington believed nations not only seek their own interests, but often trample over the rights of other nations. This is why he warned us about “the insidious wiles of foreign influence” and counseled that “there can be no greater error than to expect or calculate upon real favors from nation to nation.”

In other words, Washington warned that America’s opponents, both foreign and domestic, would pose as its advocates—they would use deception in their efforts to promote an alternative agenda. Specifically, he called Americans to suspect the motives and patriotism of their fellow citizens who:

These were the hallmarks of America’s domestic adversaries: a rejection of the authority of the national government and the role of religion in society, and an obsession with narrow interests.

During Washington’s time, narrow interests often centered on geographical affiliations. Today, they often center on one’s racial or ethnic background or income level. Division along these lines has led to a toxic identity politics that demotes national identity while elevating lesser sub-identities—to the detriment of national unity. Washington likely could not have fathomed this sort of identity-based division, yet he warned that narrowly defined views in general would negate the national interest if pursued without compromise.

Not only was man corrupt, but he was also frail and prone to error. Washington argued that some citizens might believe they are serving America’s best interest while actually undermining it. He described these citizens as “deluded … tools and dupes” under “infatuation”—the very victims of those who practiced deception.

These two observations—the depravity and frailty of man—form Washington’s first core message: that America has real enemies, both foreign and domestic, some of whom are unaware of their pernicious effects on the country.

While Washington founded a nation based on humanity’s highest ideals—liberty and equality—he believed that America must reject naïve idealism about human nature, and not put too much faith in the good will of other countries.

Washington’s second core message focused on how America might survive in a world full of treachery. He unabashedly promoted America’s interest above that of other nations, referring to it 21 times in his address. Observers today will often critique this emphasis on the national interest as being devoid of morality—as if virtue and patriotism were mutually exclusive. After all, didn’t Washington decry the tendency of nations to pursue their own interests at the expense of the rights other nations?

While it is true that interest is often derived from selfish motives, Washington argued this need not always be the case. It is possible to promote one’s interest with respect for other nations’ interests and in support of a greater moral cause. After all, he advised the American people to “observe good faith and justice toward all nations; cultivate peace and harmony with all.” He hoped America would conduct itself “as our interest, guided by justice, shall counsel.”

Washington believed a nation could pursue its interest legitimately, under the restraint of justice and morality, while also being prepared for war. In addition, promoting American strength and prosperity, he believed, would ultimately prove the viability of republican government to the world and give America “the glory of recommending it to … every nation which is yet a stranger to it.” It would increase liberty’s appeal to a global audience and, therefore, benefit mankind.

This message serves as an antidote to those who dispute the morality of national self-interest or believe America is obligated to pursue the well-being of other lands and peoples over its own.

The father of our country envisioned an America that was prosperous, generous, and in command of its own destiny. He foresaw “a free, enlightened, and at no distant period, a great nation” giving “to mankind the magnanimous and too novel example of a people always guided by an exalted justice and benevolence.” He hoped that America would one day live up to its highest ideals and conduct its affairs in an exceptionally just way.

To secure this future, however, Washington counseled Americans to reject the dreamy idealism about foreign nations and their intentions—an idealism that those dedicated to liberty and equality can find enticing.

He also warned us to be vigilant against both overt and covert enemies in our midst, and he trusted the American people—not just their representatives or bureaucrats—with this vigilance. His message speaks not only to us, but to all men and women who desire to establish and perpetuate a republic: Do not be naïve about human nature, for your adversaries (whether foreign or domestic, intentional or unintentional) will often appear as your friends.

Only with this in mind can an aspiring republic do what it has every right to do and ought to do: advance its own interests and, therefore, those of men and women everywhere who desire liberty.

In this era of uncertainty and division, we may do well to set apart Washington’s advice, as he hoped, for our “frequent review.”