Why the Washington Post Is Right to Oppose Legalized Pot in D.C. 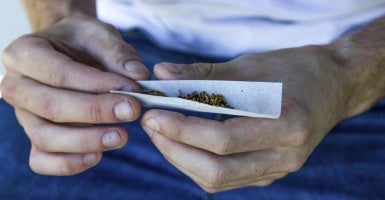 In a refreshing move, The Washington Post came out against legalizing pot in the District of Columbia in an editorial this weekend. The Post supported the decriminalization of marijuana when it was on the ballot a few years back, but draws the line at outright legalization – which is what’s on the ballot this November in D.C.

The traditionally liberal newspaper editorialized that “the rush to legalize marijuana gives us – and we hope voters – serious pause.” To their credit, the editors refuse to buy the pot-pusher canard that pot is no different than alcohol, saying that marijuana “may or may not be less harmful than alcohol and tobacco,” and add that “it is not harmless.”

To its credit, the Post was right to be skeptical about legalization. In laying out why the paper is against legalization, they note the recent report that found that teenagers who smoke marijuana daily are 60 percent less likely to complete high school, which we wrote about here. They also commend the work being done by Project SAM (Smart Approaches to Marijuana). Dr. Kevin Sabet, the co-founder of Project SAM, recently spoke at Heritage about his book, “Reefer Sanity: Seven Great Myths About Marijuana.”

Now the Post needs to take a sober look at the preliminary data coming out of Colorado and Washington State. The picture is not pretty. As I have written, studies show that traffic fatalities of pot-positive drivers in Colorado have risen 100 percent, the majority of DUI drug arrests involve marijuana and 25-40 percent were for marijuana alone, youth use is way up as are marijuana-related school suspensions/expulsions, and marijuana-related emergency room visits are up 57 percent.

The Post is to be commended for just saying no, as we did years ago in our major research paper on why legalizing marijuana is terrible public policy.