More Proof That Voter Fraud Is Real, and Bipartisan 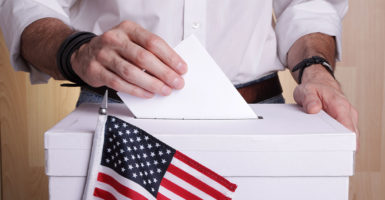 A California jury on Aug. 23 convicted a Mexican citizen of identity theft and voter fraud.

Two decades ago, Gustavo Araujo Lerma took on the identity of a deceased U.S. citizen and proceeded to vote illegally in a number of U.S. elections.

But Lerma didn’t vote for who you might expect.

Lerma is a Republican and an ardent backer of President Donald Trump. His lawyers even held up as evidence at trial a letter from Trump and Vice President Mike Pence thanking him for his support.

If nothing else, Lerma’s conviction is further proof that the incentives to commit voter fraud are truly bipartisan.

Heritage Foundation experts have long pointed out that voter fraud is not particular to one party or ideology. At its core, people cheat in elections to further their preferred causes or to advance their own careers, and there’s nothing inherently conservative or liberal about the desire to win.

That’s hardly a shocking revelation. Lerma is the latest—but hardly the first—Republican to be caught and convicted of election crimes. In fact, The Heritage Foundation’s voter fraud database contains many examples of fraud perpetrated by people on the political right.

Nevertheless, whenever a right-leaning vote fraudster is identified, liberal activists and politicians relish needling conservatives over the alleged hypocrisy.

They did it last year, when widespread absentee ballot tampering tainted the results of the race in North Carolina’s 9th Congressional District. (A special election for that seat will be held on Sept. 10.)

Some outlets are doing it now with the Lerma case, pointing out the irony that Trump—who has claimed that he most likely would have won the popular vote in 2016 if millions of illegal votes had not been cast against him—actually benefited from this very type of fraud.

But those reactions—though par for the course in today’s divisive politics—miss the point entirely.

If liberal politicians, pundits, and publications want to devote their time and attention to election integrity, they are welcome to—and should. But they ought to be focusing less on the party affiliation of the fraudster, and more on finding solutions to combat the fraud they perpetrate.

After all, whenever voter fraud occurs, it undermines the electoral process for everyone.

Fortunately, we know what policies work to combat voter fraud. Voter identification laws and programs to clean up wildly inaccurate voter rolls help to verify that only eligible individuals are voting, and that they are casting ballots in the jurisdictions where they actually reside.

These policies are not only common sense, they are urgently needed. A 2012 Pew study found that one out of every eight voter registrations were inaccurate, with 2.8 million people registered in two or more states.

Across the nation, hundreds of counties have more registered voters than residents. In June, California began a process of removing a staggering 5 million inactive registrations from its rolls—but only after it was sued by Judicial Watch.

It’s impossible to deny that individuals are exploiting vulnerabilities in the election process. The Heritage voter fraud database contains 1,217 proven instances of fraud, but that list isn’t comprehensive.

These cases—which are most likely just the tip of the iceberg—range from ineligible noncitizens casting illegal ballots to corrupt politicians buying votes and rigging their own elections.

Unfortunately, unless it’s a Republican committing the fraud, many liberal politicians and activists routinely insist that voter fraud is a figment of conservatives’ imaginations—or they assert that it’s so rare it’s inconsequential.

Yet, elections have been overturned due to fraud—sometimes, because of only a small handful of illegal ballots.

Liberals label policies such as requiring IDs at the polling place “racist,” and casually extend that derisive label to anyone who supports them.

The data are not on their side. Consider the latest from the Pew Research Center: In 2018, voter participation surged, and “last year’s midterm voters [were] the most racially and ethnically diverse ever.”

According to the Census Bureau, black, Hispanic, and Asian voter turnout all increased by double digits from 2014 to 2018. In Georgia—where Democratic gubernatorial candidate Stacey Abrams refused to concede defeat because of supposed “voter suppression”—black voter registration increased by more than 6 percentage points from the prior midterm, and actually topped white voters in percentage terms, 68.4% compared with 66.8%.

The bottom line? Accusations of voter suppression have no basis in fact.

So why, then, do we keep hearing them?

For some politicians and activists, election integrity is just too politically valuable. Turning the sanctity of the ballot box into a racially charged wedge issue animates the base, tars their opponents, and provides a convenient scapegoat for Election Day defeats.

Voters deserve better than cynical gamesmanship, and that is especially true when it comes to protecting the integrity of the electoral process.

Lerma’s conviction is a reminder that voter fraud can be committed on a bipartisan basis. Support for policies to combat it should be equally bipartisan.