The Left’s Election Day Analysis: If We Lost, They Must’ve Cheated 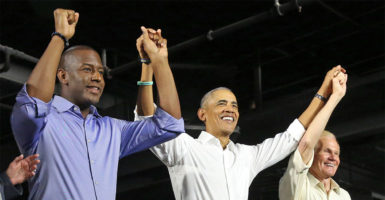 A disturbing trend is emerging from the political left: When their candidates lose elections, rather than accept lawful defeat, they denounce the election itself.

In 2016, they explained away President Donald Trump’s victory as the product of Russian meddling. Now, they are blaming election losses in Florida and Georgia on “voter suppression” and other sinister acts.

In Florida, Democrat gubernatorial candidate Andrew Gillum walked back his election night concession, claiming “tens of thousands of votes have yet to be counted,” and told supporters that a “vote denied is justice denied.”

Hillary Clinton, meanwhile, described the Georgia gubernatorial race as biased against Democrat Stacey Abrams, claiming that if Abrams “had a fair election, she already would have won.” Sen. Sherrod Brown, an Ohio Democrat, announced that Abrams’ apparent defeat was a sure sign that Republicans “stole” her election.

Sure enough, when the final tally gave the victory to Republican Brian Kemp, Abrams refused to concede, because “concession means to acknowledge an action is right, true or proper.” Instead, Abrams blamed her defeat on Kemp’s supposed “suppression of the people’s democratic right to vote.”

Such pronouncements are creating a dangerous perception within liberal ranks that electoral defeat automatically equals electoral theft. For years, the left has denounced election integrity measures as tantamount to disenfranchisement. Now they are saying the same thing about electoral defeats.

This sort of rhetoric can have profound—and dangerous—consequences. Democracy works only when the people have confidence that the electoral process is free and fair, and the outcome is valid.

Sometimes, to be sure, this is not the case.

The Heritage Foundation election fraud database presently has 1,147 proven instances of fraud. Several of these cases involve elections that were overturned because enough fraudulent ballots had been cast to alter the outcome.

But there is a key distinction between those cases and liberals’ new accusations: proof.

Winning a court case to invalidate an election on the basis of fraud requires gathering significant evidence, and demonstrating, for example, that ballots were tampered with, that voters were bribed or coerced, or that elections officials rigged the results. Convicting someone on criminal election fraud charges requires proof beyond a reasonable doubt.

It’s a high bar to meet, leagues beyond the reckless and unsubstantiated allegations erupting after the Florida and Georgia elections.

After a machine recount, in the Florida gubernatorial race, Ron DeSantis’ 33,683 vote lead over Gillum had hardly moved at all.

And in Georgia, the left’s claims that Kemp was overseeing insidious vote suppression efforts seem nonsensical, given that voter turnout actually skyrocketed.

According to FiveThirtyEight.com, 55 percent of all eligible Georgia voters cast a ballot: “21 points higher than the state’s 1982-2014 average. That was the biggest change from the average of any state.” Exit polls indicate that minority turnout in the state may also have set records.

Not quite. A more apt summation of the election would be that “liberals are failing democracy.”

Telling voters that elections are only fair when their party wins sets up every election to be discounted by one side or the other. It foments distrust and dissension, and it feeds the vitriol that already pervades so many aspects of modern politics.

Some political strategists might hope that de-legitimizing the electoral process will frighten and enrage the liberal base, increase turnout, and pay dividends in 2020. If true, then the left’s cynical gamble on “voter suppression” rhetoric would be a great irony.

But for all the temptations of that approach, we can and should hope that the rhetoric of the last few weeks—overheated, baseless, and reckless as it has been—will fall by the wayside.

Even today, in an age of division and zero-sum politics, there remains something more important than winning elections: keeping our democracy.