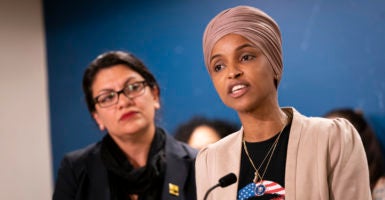 The free country of Israel seems to be the only country in the Middle East that bothers Reps. Rashida Tlaib, D-Mich., and Ilhan Omar, D-Minn. Pictured: Omar with Tlaib by her side speaks at a press conference at the Minnesota state Capitol on Aug. 19. (Photo: Renee Jones Schneider/Star Tribune/Getty Images)

It perplexes me why anyone would question the perfectly logical move by Israel to deny Reps. Rashida Tlaib, D-Mich., and Ilhan Omar, D-Minn., entry to the country.

Who invites guests whose motive is to destroy their host?

We certainly don’t do it in the USA. No one, elected official or not, is permitted entry into the USA whose agenda is the destruction of our country.

Both Tlaib and Omar are aggressive supporters of the BDS movement—boycott, divest, sanction—whose objective is economic strangulation of Israel. They are voices of unremitting hostility toward Israel’s existence.

Let’s get some perspective.

According to Tlaib, the boycott, divestment, sanctions movement is a freedom movement. She tweeted that she is “tired of folks discrediting a form of speech that is centered on equality and freedom.”

But Tlaib’s agenda is not freedom. It’s about eliminating Israel.

Freedom House is a nonpartisan organization in Washington, D.C., that issues an annual report ranking nations around the world according to freedom—measuring political rights and civil liberties in each country.

In the region that Freedom House calls Middle East and North Africa, there are 21 countries and territories, and only two are ranked free, Israel and Tunisia, with Israel receiving the highest total freedom score in the region.

So freedom is the exception rather than the rule in the Middle East, and Israel is the shining light. Yet Israel is the only country in the region that seems to bother Tlaib and Omar.

Have we heard a word from them about the 95%—nearly 400 million—in the region who are not free? Of course not.

Although the West Bank, where Tlaib’s grandmother lives, and Gaza are not sovereign countries, Freedom House identifies them as territories and includes them in its freedom rankings.

Both are ranked “not free” and have rock-bottom scores.

This is not because of Israel. Palestinians have autonomy in their internal affairs.

Why doesn’t Tlaib speak to the fact that where Palestinians do have control over their own affairs, they choose to live under a corrupt, un-free regime?

In 2005, Israel unilaterally pulled out of Gaza, and Palestinians assumed full control.

What did they do? Rather than starting to build, they announced, “Today Gaza, tomorrow Jerusalem,” and started firing rockets into Israel.

Meanwhile, as part of the operation, Israel uprooted 8,500 Israeli settlers who were living there. Despite protesting being evacuated from their homes, these Israelis accepted the fact, and some moved eastward into the desert, which, in short order, they irrigated and made bloom—characteristic of the history of Israel.

Within five years, they were exporting $50 million per year of organic vegetables.

According to the Pew Research Center, there are 49 Muslim-majority countries in the world. Two, per Freedom House, are free. But what bothers Tlaib and Omar is the world’s single Jewish country, Israel, which is free.

You would think they would admire and want to help others emulate the social and economic miracle that Israelis have created in their young country. Instead they spread hate and blame.

A former prime minister of Israel, Golda Meir, famously said, “Peace will come when the Arabs will love their children more than they hate us.”

This was true when she said it 62 years ago, and unfortunately, Tlaib and Omar continue this destructive legacy today.

Both Prime Minister Benjamin Netanyahu and President Donald Trump are right to marginalize these negative personalities who work so hard to push the world in the wrong direction.