5 Things to Know About the New UN Ambassador 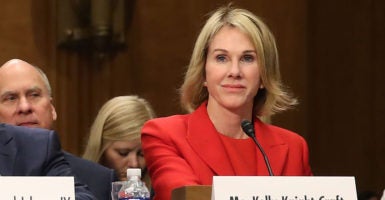 Kelly Knight Craft was a business executive and philanthropist when President Donald Trump appointed her as ambassador to Canada in June 2017.

Now Craft is the U.S. ambassador to the United Nations, replacing the popular Nikki Haley, a former governor of South Carolina. She has yet to be sworn in.

On July 31, the Senate voted 56-34 to confirm Craft as U.N. ambassador, with five centrist Democrats supporting her. She had been ambassador to Canada since October 2017.

Secretary of State Mike Pompeo called Craft “an outstanding advocate for America’s national security and economic interests in Canada,” and said she is “extremely well-qualified to do the same at the United Nations.”

Here are five things to know about the nation’s new U.N. ambassador:

1. She managed her own business advisory firm.

The private company was incorporated in 2005. The Kentucky Registry reports that the company’s registration is still active.

2. President George W. Bush named her in 2007 as an alternate delegate to the U.N. General Assembly.

Craft told the Glasgow (Kentucky) Daily Times in September 2007 that she hoped to focus on “children’s issues” at the U.N., and had a special interest in “health issues relating to children in poverty and in Appalachia.”

She grew up in Glasgow, the daughter of veterinarian and Democratic activist Bobby Guilfoil and Sherry Dale Guilfoi, and she graduated from Glasgow High School.

“It will be a special honor to be part of the U.S. delegation, especially given the enormous global issues at stake for our country,” she said at the time. “I’m grateful for the chance to represent the American people and Kentucky and contribute to our nation through public service.”

Twice divorced, she has been married for more than three years to coal-mining magnate Joe Craft. The Crafts are major donors to Republican candidates, Politico reported, including Trump, Senate Majority Leader Mitch McConnell of Kentucky, Sen. Marco Rubio of Florida, and Sen. Mitt Romney of Utah.

3. She co-founded Morehead State University’s Craft Academy for Excellence in Science and Mathematics.

Since August 2015, the academy has provided a college-level curriculum that allows students to complete up to two years of university coursework while finishing high school.

Craft herself graduated with a bachelor of arts degree from the University of Kentucky in 1984. She also served on the university’s board of trustees until she became ambassador to Canada.

4. She was a leader with the Salvation Army of Lexington and the Center for Rural Development.

Craft’s official bio describes her as “demonstrating a deep commitment to her home state by serving in several leadership roles with the Salvation Army of Lexington and the Center for Rural Development, a nonprofit dedicated to economic development in rural Kentucky.”

Craft also served on the boards of the Kentucky Arts Council, the Lexington Philharmonic, YMCA of Central Kentucky, and the United Way of the Bluegrass, an organization that “fights for the basic needs, financial stability and education of every person in every community across Central Kentucky.”

5. She is friends with Canadian rapper Drake.

The friendship blossomed when Drake visited Craft’s home state for a basketball game.

Delighted that my friend and fellow @UKAthletics fan @Drake was nominated for #AMA Artist of the Year and @BET #HipHopAwards Lyricist of the Year! #BBN pic.twitter.com/N2alAS5mab