Views of Rep. John Ratcliffe Under Microscope After Trump Picks Him as Intelligence Chief 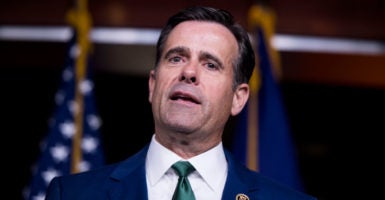 Hours before President Donald Trump tapped him Sunday as director of national intelligence, Rep. John Ratcliffe, R-Texas, urged investigations into potential wrongdoing during the Obama administration, including illegal leaks to the media.

“What I do know as a former federal prosecutor is it does appear that there were crimes committed during the Obama administration,” Ratcliffe told Fox News Channel’s Maria Bartiromo.

Trump announced later Sunday that he was nominating Ratcliffe to replace Dan Coats, who will leave the Office of the Director of National Intelligence on Aug. 15.

I am pleased to announce that highly respected Congressman John Ratcliffe of Texas will be nominated by me to be the Director of National Intelligence. A former U.S. Attorney, John will lead and inspire greatness for the Country he loves. Dan Coats, the current Director, will….

Ratcliffe, a former U.S. attorney, would not have prosecutorial power as head of the Office of the Director of National Intelligence, which coordinates intelligence sharing among 17 federal agencies. But his comments suggest that the office would cooperate with any ongoing investigations.

Coats, a former Republican senator from Indiana, has been seen as out of step with Trump on various aspects of the Russia issue. Ratcliffe has been one of Trump’s strongest defenders during the Russia probe and has urged investigations into the FBI’s applications for wiretaps on former Trump campaign adviser Carter Page.

Ratcliffe said Sunday that while he was “not going to accuse any specific person of any specific crime,” he listed three incidents that he believes should be investigated.

He noted a leak to The Washington Post of classified National Security Agency transcripts of a phone call that Michael Flynn had in 2016 with Russia’s ambassador to the U.S.

“That’s a felony,” Ratcliffe said of the leak.

Simpson told the House Intelligence Committee that he met Ohr, whose wife was a Fusion GPS contractor, after the 2016 election. But Ohr testified that he and Simpson met in Washington, D.C., on Aug. 22, 2016.

“One of them is not telling the truth,” Ratcliffe said. “We need a process to identify that.”

He then shifted to former FBI Director James Comey’s leak of memos of his conversations with Trump to the press.

“He admitted that he leaked his confidential conversations with the president to a reporter. Did that include classified information? We need a fair process to find out the answer to that,” Ratcliffe said.

Comey has testified that after he was fired as FBI director on May 9, 2017, he instructed a friend, Daniel Richman, to leak memos of his conversations with Trump to The New York Times.

Comey wrote nine memos following his interactions with Trump and gave several of the documents to Richman. He said he wanted the documents published in order to prompt the appointment of a special counsel.

Ratcliffe went on to say that he has confidence in several Justice Department inquiries into the origins of the Russia probe and surveillance activities against the Trump campaign.

“I trust, because [Attorney General] Bill Barr has earned my trust already, and the trust of the American people, that there’ll be a fair processes with [U.S. Attorney for Connecticut] John Durham and with [Inspector General] Michael Horowitz to get answers to that and provide accountability where it really belongs.”

Horowitz, the Justice Department inspector general, is investigating the FBI’s surveillance of Page.