How Natural Gas Exports Are Giving America a Key Edge 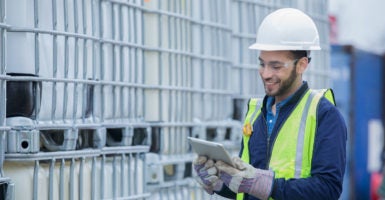 "When the United States acts as a dominant energy leader, it reduces the power of rogue nations to use their energy supplies as political weapons," writes Nicolas Loris. (Photo: Courtney Hale/Getty Images)

Graham Filby is a member of the Young Leaders Program at The Heritage Foundation.

According to a new report published by the International Energy Agency, the United States could become the world’s largest exporter of liquefied natural gas as soon as 2024.

Natural gas is primarily methane, which has a very low density. To ship natural gas, exporters cool it until it reaches minus-260 degrees Fahrenheit. This process liquefies the gas, which allows for safe and efficient transportation.

Importers then turn the liquefied natural gas back to gas form and transport it via pipeline for consumption.

Natural gas has numerous applications in the residential, industrial, and commercial sectors. Half of all U.S. homes use natural gas for heating and cooling, and natural gas supplies 31% of the overall primary energy demand in the U.S.

Before the shale revolution, it appeared as though the U.S. would become a massive natural gas importer. In fact, the most recent export terminal built in Louisiana in 2008 was originally constructed as an import terminal.

However, smart extraction technologies created an economic boom and catapulted the U.S. to be the world’s largest natural gas producer for more than a decade. Last year, the U.S. produced more natural gas than the entire Middle East combined.

The industry is expected to support 3 million jobs by next year. This new energy market will also contribute $62 billion in federal and state tax revenues in gas-producing states.

Domestic natural gas production will provide the United States with a stable supply of affordable energy well into the future.

A strong liquefied natural gas trade policy that removes burdensome regulations and empowers the states will strengthen our global energy leadership and protect our allies abroad from manipulative energy suppliers, such as Russia and Iran.

I believe that a focus on energy security can and must be a critical new element in the American strategic partnership in Central and Eastern Europe, and will benefit Poland, Europe as a whole, and the United States.

The shale revolution in the United States has fundamentally transformed the global energy picture, as well as the debate concerning U.S. energy policy. …

I believe the United States should undo outdated regulations that prevent us from sharing our energy abundance with friendly countries. Doing so would benefit our allies, but also provide important economic and trade benefits to the United States.

When the United States acts as a dominant energy leader, it reduces the power of rogue nations to use their energy supplies as political weapons.

In Europe, it’s critical that Russia does not have a monopoly supplying Europe’s energy. Countries such as Poland, Croatia, and Lithuania need energy support from the United States to survive Russian aggression.