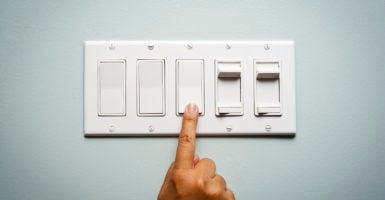 Patricia Patnode is a member of the Young Leaders Program at The Heritage Foundation.

There is nothing environmentally conscientious about prematurely shutting down sound infrastructure that provides clean, low-cost, reliable electricity.

A new report from the Institute for Energy Research gives Americans an idea of the cost of mandating a transition from our present electricity suppliers, which are predominantly natural gas, coal, and nuclear power.

There is no perfect energy resource or technology—every option has trade-off—but, for 30 years, analysts have used a metric called levelized cost of electricity to form educated guesses about the relative merits of building and operating power generation from coal, nuclear, natural gas, hydro, wind, and solar power for 30 years.

A megawatt-hour is equal to roughly the amount of energy used by 330 homes for an hour.

But even the levelized cost of electricity does not offer a perfect apples-to-apples comparison.

The Institute for Energy Research’s study tries to get closer to the truth by taking into account hidden costs associated with different energy resources. The study found:

The study sheds some important light on policies state renewable energy mandates, which force certain politically preferred energy onto the grid rather than what may make more economic sense for customers.

Take California for example. Elsewhere in the country, 89 nuclear reactors have extended their operating licenses beyond 40 years because they can generate decades more of inexpensive energy long after recovering the costs of construction.

But thanks to California’s decision to require that 50% of its power come from renewables by 2030, its final nuclear plant, Diablo Canyon, must close as part of the state’s mission to reduce carbon dioxide emissions by 80%.

This single plant produces 9% of all power generated in California, with no carbon dioxide or air pollutants, but it will be closed in 2024 to make room for more politically mandated renewable energy.

Coal, wind, natural gas, solar, nuclear, and other energy technologies bring different things to the table to meet customer needs for electricity. But when politics overrides customer preferences, the economics get fuzzy and customers may be signing up for more (literally, in terms of price) than they bargained for.

This article has been updated to reflect that Patricia Patnode co-authored it.