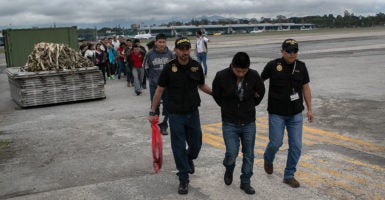 The Trump administration reportedly plans to renew the operation to apprehend and deport thousands of illegal immigrants who have ignored court orders. Pictured: Guatemalan police escort an accused criminal on the airport tarmac after he and other Guatemalans were deported from the United States on May 30, 2019, in Guatemala City, Guatemala. (Photo: John Moore/Getty Images)

The White House is reportedly picking plans back up to apprehend and deport thousands of illegal immigrants who have ignored court orders to leave the country.

Immigration and Customs Enforcement on Sunday will launch raids across major U.S. cities, according to Homeland Security officials who spoke with The New York Times and NBC News.

The Sunday raids will target roughly 2,000 illegal aliens who, despite court orders to leave, continue to remain in the U.S. Targeted cities include Los Angeles, New York, Chicago, Miami, and other areas.

President Donald Trump in June announced plans to deport “millions” of illegal immigrants, but he later postponed those plans, telling the public he wanted to allow time to negotiate with congressional Democrats on a solution to the immigration crisis. However, it is likely that the plans were also scrapped because key details were leaked to the media.

The president has since said his administration was ready to renew the operation.

“These are people where we have their papers, we’ve gone through the court system. [The deportations will] be starting fairly soon, but I don’t call them raids. We’re removing people that have come—all of these people over the years—that have come in illegally. We are removing them and bringing them back into their country,” Trump said on July 5.

Ken Cuccinelli, the newly-appointed acting director of U.S. Citizenship and Immigration Services, also said that ICE agents were ready to apprehend and deport aliens who are ignoring court orders.

“They’re ready to just perform their mission, which is to go and find and detain and then deport the approximately 1 million people who have final removal orders,” Cuccinelli said during a CBS interview Sunday.

The ICE raids are expected to last several days and also include “collateral” deportations—the apprehension of illegal immigrants who were not original ICE targets, but happened to be at the scene.

If possible, family units who are arrested in unison will be taken to family detention centers in Pennsylvania and Texas, but some may be placed in hotel rooms.

The goal, according to officials who spoke with The New York Times, is to deport families as soon as possible.

Content created by The Daily Caller News Foundation is available without charge to any eligible news publisher that can provide a large audience. For licensing opportunities for this original content, email [email protected]ailycallernewsfoundation.org.