Michelle Obama: Trump’s Inauguration Crowd ‘Not Reflective of the Country’ 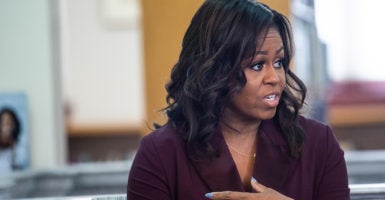 Former first lady Michelle Obama got emotional in an interview about "a crowd that was not reflective of the country" at President Donald Trump's inauguration. Pictured: Obama speaks about her book "Becoming" at the Tacoma Public Library in Washington on March 24. (Photo: Jim Bennett/Getty Images)

Former first lady Michelle Obama spoke out about President Donald Trump’s inauguration, saying she was one of a “handful of people of color” in attendance.

The former first lady spoke to Gayle King of “CBS This Morning” about her feelings when Trump took office, making note of the lack of diversity in the crowd.

“That day was very emotional, and then to … sit at that inauguration, and to look around at a crowd that was not reflective of the country—it was just such the opposite—and during Barack’s inauguration, we made sure that the crowd looked like all of America, having the Tuskegee Airmen, having civil rights folks, having folks who had marched—you could look out at his crowd and you could see America. All of it,” Obama said.

“And I had to sit in that audience, one of a handful of people of color, and then listen to that speech, and all that I had … held on to for eight years, watching my husband get raked over the coals, feeling like we had to do everything perfectly—no scandal … It was a lot emotionally,” the former first lady continued.

“By the time I got on that plane, it was a release of eight years of having to try to show up, as we all know we have to do,” she added.

Obama also told King that “our upset wasn’t over our legacy.”

“We weren’t there to instill our legacy—we were there to do a job on behalf of the country,” she said.

“What saddens me is what it’s doing to the country as a whole,” Obama continued. “What we have to be really conscientious of is what kind of country we’re leaving for our children or grandchildren.”

The former first lady also told King that former President Barack Obama was “one of the most productive and profound presidents of our lifetime” and promised that she and her husband would vote for whichever candidate wins the Democratic primary, according to CNN.