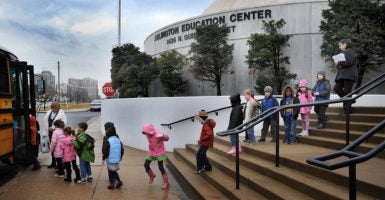 “[The proposed policy] is an accommodation procedure, wherein transgender students are given preferences and privileges that deny other students their rights, such as Title IX protections for girls, and privacy rights for both boys and girls,” says Maria Keffler of Arlington Parent Coalition. Pictured: Kindergarten students from Glebe Elementary School leave the Arlington Planetarium following a show on Feb. 25, 2011. (Photo: Gerald Martineau/The Washington Post/Getty Images)

ARLINGTON, Va.—A group of concerned parents held a press conference just ahead of a scheduled Arlington County School Board meeting Tuesday evening about the adoption of a policy concerning transgender student protections in the school district.

“[Arlington Public Schools] has far overreached its authority in this matter, and needs to be reminded by concerned parents and community members that political and cultural pressures should never outweigh the school’s responsibility to make safe and healthy educational policy,” said Maria Keffler, spokeswoman for the Arlington Parent Coalition.

The press conference’s purpose was to publicly air that parents of children in Arlington Public Schools have felt unable to voice their concerns for child safety regarding the proposed policy implementation procedure, or PIP.

The coalition’s website says it promotes the district’s policies, “which respect parents’ constitutional right to maintain responsibility and authority over their children and their children’s education, and to raise children according to the family’s values.”

“[The proposed policy] is an accommodation procedure, wherein transgender students are given preferences and privileges that deny other students their rights, such as Title IX protections for girls, and privacy rights for both boys and girls,” added Keffler.

Keffler said the school district has been working on the policy “exclusively” with Arlington Gender Identity Allies, a group made up of “parents [and] community members working to make Arlington Public Schools a welcoming place for transgender, nonbinary, [and] gender expansive youth/staff.”

She also complained that specific information on the policy proposal could only be received through Freedom of Information Act requests.

The policy being considered outlines a number of new rules for the treatment of transgender students.

Under the policy, the definitions for “gender identity” and “transgender” that are deemed acceptable by the school board are clearly spelled out.

Access would be granted to bathrooms and locker rooms that “correspond to a student’s gender identity,” and students would have the ability to participate in any “‘co-curricular or extra-curricular activity consistent with their gender identity,’ as regulated by the Virginia High School League.”

Overnight school events would allow students to sleep in a quarters consistent with the student’s gender identity.

Students would be allowed to use names and gender pronouns of their choosing that match their gender identity, with school staff making updates as needed to classroom records.

It is also stated that disclosing a student’s “transgender status, legal name, or gender assigned at birth” may be a violation of privacy laws.

If the policy is adopted, teachers would have to undergo periodic training to to keep up with transgender issues.

The policy proposal came after what Superintendent Patrick Murphy said is needed to ensure compliance with the school board policy known as J-2 Student Equal Educational Opportunities/Nondiscrimination.

“It is the responsibility of each Arlington Public Schools staff member to ensure all students, including transgender students, have safe, supportive, and inclusive school environments,” reads the policy document, which would serve as a supplement to the existing J-2 policy.

After the press conference, 39 community members showed up to voice their thoughts on the proposed policy at the public school board meeting.

Of those, 21 were parents of students in support of implementation and five were against it. Four Arlington Public Schools teachers and five current students also showed their support of the policy.

One student told the story of a friend, a 9-year-old fourth-grader who goes by “Griffin.” Griffin, who identifies as a transgender girl, wrote to the school board: “Thank you for supporting me and others. I will feel safe and more comfortable at school next year.”

The Daily Signal spoke with Sarah Priestman, an Arlington Public Schools teacher, about the policy at the school board meeting.

“I’m here because I support all the work these parents have done, and my own son is transgender and so years ago we did some work to create a more opening and supportive environment in the schools,” she said.

Now he’s in college so I’ve been sort of observing the work the parents are doing whose kids are in [Arlington Public Schools] now, and it’s amazing work and I want to support what they’re doing.

The most common complaint of parents at the meeting who oppose the policy echoed those from the Arlington Parent Coalition.

“The whole community should have been a part of it from the start,” one parent said to the school board. “The questionnaire didn’t even ask if people were residents of Arlington, yet that was the way for us to have an input.”

Another parent, who works as a psychiatrist, told the school board that “research on this topic (transgenderism in young children) isn’t clear yet.”

He wanted the school board to consider a “broader survey of research,” and wanted to “pause” action taken on the policy implementation program until those things could be completed.

Another parent expressed concern for students like her daughter who struggle with a mental disability. She also said she was frustrated with the school board’s lack of transparency concerning the policy, saying that “everything had to be requested by FOIA.”

During the school board meeting, Murphy, the superintendent, said a few major concerns surfaced in his morning meeting with citizens.

“We need additional time to come to a consensus, additional engagement for greater understanding, and that we need to establish consistency with guidelines for the upcoming year,” Murphy said.

However, when asked by school board member Barbara Kanninen if there would be any delay in implementing the policy implementation procedure, Murphy replied, “No, we will continue to move forward and place this by the start of the school year.”

The school board first considered the transgender youth policy last September. It sought suggestions from the Arlington Gender Identity Allies, and the school board “staff team” produced a draft of the policy in March.

A community questionnaire was released in June for Arlington residents to voice their opinions; however, the results of the questionnaire were not released by the school board.

The policy proposal will go through a two-week “office process” before any further development action is announced. The next scheduled meeting will be Monday, June 24, at 2 p.m. to host the School Board Policy Subcommittee on general policies.

It is not specified whether this meeting is open to the public.