In Gerrymandering Case, Supreme Court Rules It’s a Matter for Lawmakers, Not Judges 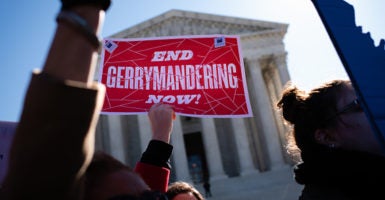 A Fair Maps rally was held in front of the U.S. Supreme Court on March 26. The rally coincides with the U.S. Supreme Court hearings in landmark redistricting cases out of North Carolina and Maryland. In a decision released Thursday, the high court determined that gerrymandering is a political matter. (Photo: Sarah L. Voisin/The Washington Post/Getty Images)

In a new decision, the Supreme Court determined partisan gerrymandering disputes are a political question, not something federal courts should be deciding.

In a 5-4 ruling Thursday, the high court decided in a pair of cases regarding gerrymandering—which is the practice of state legislatures drawing up districts for congressional and state legislative seats to benefit one party over another after the census.

“No one can accuse this Court of having a crabbed view of the reach of its competence,” Chief Justice John Roberts wrote in the majority opinion. “But we have no commission to allocate political power and influence in the absence of a constitutional directive or legal standards to guide us in the exercise of such authority.”

In a somewhat unusual move, Justice Elena Kagan read her dissent from the bench—demonstrating a degree of emotion the case has generated.

“In giving such gerrymanders a pass from judicial review, the majority goes tragically wrong,” Kagan wrote.

“For the first time ever, this Court refuses to remedy a constitutional violation because it thinks the task beyond judicial capabilities,” Kagan continued. “If left unchecked, gerrymanders like the ones here may irreparably damage our system of government.”

There were few surprises from this case, said Hans von Spakovsky, manager of the Election Law Reform Initiative at The Heritage Foundation.

“This case was one of the top priorities for the liberal establishment,” von Spakovsky told The Daily Signal. “There was no way the four liberal justices would rule differently on this, no matter what the law and Constitution says.”

He viewed it as a clear-cut case.

“It’s a political question and not something the courts should decide on,” said von Spakovsky, a former Justice Department lawyer and one-time member of the Federal Election Commission. “This is something that should be decided by state legislatures or Congress.”

Former U.S. Attorney General Eric Holder blasted the ruling on Twitter. Holder made opposition to Republican-favored gerrymandering his top cause as the chairman of the National Democratic Redistricting Committee.

“With partisan gerrymandering decision (plus Citizens United/Shelby) Roberts Court has entered a new political Lochner era,” Holder said in the tweet. “This decision tears at the fabric of our democracy and puts the interests of the established few above the many. History will not be kind in its assessment.”

Shelby County v. Holder was a 2013 Supreme Court decision that determined a 1965 provision of the Voting Rights Act that required federal approval of voting laws for certain states guilty of past discrimination was not constitutional because the federal government applied 40-year-old data that wasn’t applicable and would now upset the balance of federal-state authority.

The gerrymandering cases that the ruling came down on Thursday were Benisek v. Lamone out of Maryland and Rucho v. Common Cause out of North Carolina.

In Maryland, the legislature moved about 66,000 Republicans out of the 6th Congressional District and added about 24,000 Democrats—flipping a formerly solid GOP district.

A district court ruled the map violated the First Amendment “by burdening both the plaintiffs’ representational rights and associational rights based on their party affiliation and voting history.”

The Republican state legislature in North Carolina created a more GOP-heavy congressional district. However, lower courts determined this violated the 14th Amendment, the First Amendment, and Article 1 of the Constitution.

Neither the Founders nor the drafters of the 14th Amendment had redistricting in mind, said J. Christian Adams, president of the Public Interest Legal Foundation.

“The Supreme Court wisely chose to reject federal overreach into the states’ constitutional authority to conduct redistricting,” Adams said in a public statement.

One of the litigants in the case was Common Cause, a liberal government watchdog group that challenged the North Carolina district.

“Today, five Supreme Court Justices turned their backs on hundreds of thousands of people in Maryland and North Carolina stripped of their voice in Washington by power-hungry politicians,” Common Cause President Karen Hobert Flynn said in a statement.

“The Supreme Court had the opportunity to end partisan gerrymandering once and for all but instead a narrow majority chose to wash their hands of the undemocratic practice,” Flynn continued.

Without recourse to the Supreme Court, the American people must continue to take the battle to the state courts, to the polls, and to the streets, to make their voices heard and to end partisan gerrymandering once and for all.