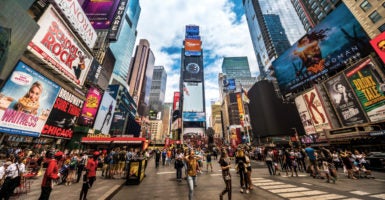 Authorities arrested Ashiqual Alam last week for planning a terrorist attack against Times Square in New York City. This is the 111th Islamist terror plot or attack against the U.S. homeland since 9/11, and the 98th to be a homegrown plot.

Alam is a 22-year-old native of Bangladesh who had been living in Queens, New York. He initially became a suspect through meetings with undercover agents.

Throughout multiple meetings with these agents starting in August 2018, Alam expressed violent, Islamist sentiments, mentioning his admiration for the work of Osama bin Laden, Anwar Al-Awlaki, ISIS, and his desire to continue the mission of establishing a caliphate.

By the end of 2018, Alam was discussing with undercover agents how to obtain firearms and explosives to target innocent civilians in Times Square or potentially government officials in Washington, D.C.

In January 2019, he performed “recon” trips to Times Square in search of possible target sites. He expressed an interest in using suicide vests with ball bearings to inflict maximum damage on victims. Alam also travelled twice to a shooting range in Pennsylvania to learn how to operate guns.

Alam underwent Lasik eye surgery in March 2019, telling undercover agents that it would help him to see better when carrying out his plot.

In June 2019, Alam met with three undercover agents presenting as arms dealers who showed Alam multiple weapons, including handguns, an AK-47 assault rifle, and hand grenades, all of which were of interest to Alam, who stated that they would provide support for his plot. He also favored weapons with filed-off serial numbers.

He paid $400 for two Glock 19 semi-automatic pistols, and inquired about the possibility of buying a silencer. Law enforcement arrested him shortly afterward and took him into custody on June 6, 2019.

New York City is the most common city to be targeted by terrorists in the U.S., and this is at least the fifth plot or attack against the Times Square area specifically. Many will remember the botched car bomb attack against Times Square by Faisal Shahzad in 2010.

More generally, public gathering spaces such as Times Square are the most common type of target by Islamist terrorists, especially following the spread of ISIS propaganda calling for such strikes.

Once again, though, the hard work of the FBI and Joint Terrorism Task Force prevented an attack. Over the course of an almost-yearlong investigation involving multiple undercover agents, the task force kept the people of New York safe.

The U.S. must maintain this proactive approach of stopping terrorism before it strikes.