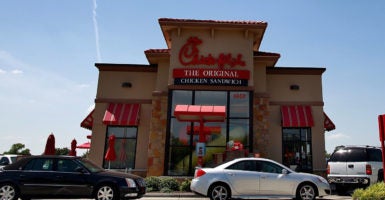 The legislation—Senate Bill 1978, dubbed the “Save Chick-fil-A” bill—specifically prohibits local governments in the state “from retaliating against anyone based on their affiliation or support of a religious organization,” according to KEYE-TV, the CBS affiliate in Austin, Texas.

The legislation came in response to the San Antonio City Council in March banning the San Antonio International Airport from leasing space to Chick-fil-A because of what critics said was the  fast-food chain’s “legacy of anti-LGBT behavior,” NBC News reported.

Roberto Trevino, a member of the City Council, said that the council was justified in banning the fast-food chain from the airport.

“San Antonio is a city full of compassion, and we do not have room in our public facilities for a business with a legacy of anti-LGBTQ behavior,” Trevino said. “Everyone has a place here, and everyone should feel welcome when they walk through our airport.”

Equality Texas, an LGBTQ group in Texas, criticized the new state law, tweeting that it was an “anti-LGBTQ dog whistle,” saying it would “advance the message that anti-LGBTQ views deserve special protections.”

Some Democratic state lawmakers said they were opposed to the bill because they thought it would promote discrimination.

“We can’t discriminate against one in order to protect the other,” said state Rep. Mary Gonzalez, the second openly LGBT member to be elected to the Texas Legislature, according to DallasNews.com. “The scariest part of this bill … is the individuals who will take this bill and use your vote for this bill to perpetuate hate.”

Weeks before signing the legislation, Abbott, a second-term Republican, telegraphed on Twitter that he supported it.