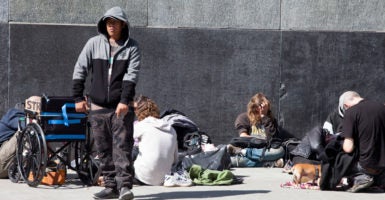 The homelessness crisis in California has led to an outbreak of disease. (Photo: Christian Science Monitor/Getty Images)

California’s great wealth only masks its increasing dysfunction. Nothing highlights this quite like the explosion of homelessness in the Golden State.

By any measure, California’s homelessness crisis is reaching epic proportions.

There are now nearly 60,000 homeless people living in Los Angeles County, a 12% increase from the previous year, according to the Los Angeles Homeless Services Authority.

Los Angeles is hardly an outlier.

“Other localities in California saw substantial increases compared with 2017, when they last conducted a count,” according to The Wall Street Journal. “In San Francisco, the number rose 17% while Alameda County, which includes Oakland, saw a 43% increase. Homelessness grew 42% in San Jose over the past two years and 31% in Santa Clara County, the heart of Silicon Valley.”

San Francisco, for all of its radical politics, is a beautiful city by the bay. Yet it’s evolving into a dysfunctional, filthy mess.

“Even in the good old days there was a Skid Row. Now the beggars, drug addicts, and lost souls are all over the city,” wrote San Francisco columnist Carl Nolte.

How bad has it become? Nolte wrote:

The city is out of control. Traffic is a mess, but it’s rare to see a traffic control officer. Trucks are double-parked everywhere. The city is dirty—a friend just back from Mexico City was astounded to find the streets there far cleaner than the ones in her native city. There is so much human waste on the streets of San Francisco the city formed a ‘poop patrol’ where workers are paid $71,000 a year, about same as the average school teacher.

California maintains a generous welfare regime, and its temperate and generally pleasant weather make it a natural haven for homeless people.

These populations are growing at a quickening pace, even as cities like San Francisco grow in wealth and opulence. Even worse, diseases that are more associated with medieval times than modernity are quickly spreading.

Los Angeles is currently suffering from an outbreak of Typhus, a flea-borne disease spread by rats. This comes hand-in-hand with the growing homeless community: Filthy conditions and widespread homelessness have aided the spread of this deadly disease, which has affected police officers, city officials, and others around the city.

But as is typical for California, the state’s “remedies” never address the underlying issues and instead try to quell the homelessness problem with more direct welfare methods.

If anything, this has just created a larger incentive for homeless people to come to the state—but not as a means of escaping their situation or to receive the help they need.

California has thrown billions of dollars at the problem, and plans to throw billions more. But that won’t solve the underlying issues. The problem is a culture that has allowed homelessness, filthy streets, and increasingly unlivable conditions to persist.

There are productive measures that can be taken to at least alleviate the crisis.

One step would be to address the problem of mental illness.

The deinstitutionalization of the mentally ill en masse has had serious consequences, and there’s no doubt it has contributed to the present surge in homelessness. This is a nationwide phenomenon.

There may be at least some hope in San Francisco, where the City Council recently took an overdue step making it easier to involuntarily commit the mentally ill to institutions. Simply taking these mentally ill individuals off the street helps reduce drugs, crime, and general lawlessness in society, which are all compounded by homelessness.

Some cities have taken other measures that seem to have made progress.

According to City Journal, in Houston “local leaders have reduced homelessness by 60% through a combination of providing services and enforcing a zero-tolerance policy for street camping, panhandling, trespassing, and property crimes.”

Houston’s focus is on making the city a cleaner, more sanitary place for all residents.

These measures often prove more effective than simply reducing housing costs, as City Journal noted, because the high cost of housing, while a burden on the working poor, is rarely the cause of homelessness.

Even so, California could put a dent in its own housing costs by tackling housing regulations that have reduced the amount of housing available and pushed costs upward.

So, three things California could do to start turning this crisis around are: reducing housing prices through deregulation, ensuring that the mentally ill receive necessary treatment and are taken off the street, and strictly upholding the rule of law.

Will the powers that be in California finally get smart?

Probably not, but if they don’t, the crisis—and the embarrassment—will only intensify as middle-class Americans continue leaving the state in droves for greener (or redder) pastures.