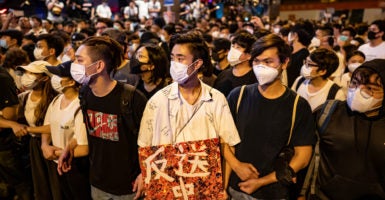 Over a million protesters took to the streets in Hong Kong to rally against the extradition proposal in Hong Kong, China, June 10, 2019. (Photo: Anthony Kwan/Getty Images)

The following is an edited transcript of an interview with Mike Gonzalez, which appeared in The Daily Signal’s June 11 podcast episode.

Daniel Davis: That’s the sound of protesters in Hong Kong clashing with police over the weekend.

Hundreds of thousands took to the streets in Hong Kong to protest what’s called the extradition bill, legislation that, if passed, would allow Hong Kong residents to be extradited to China on a range of offenses.

Joining us to unpack what’s happening is Mike Gonzalez, senior fellow at The Heritage Foundation, and a man who lived in Hong Kong for eight years. Thanks for joining us, Mike.

Mike Gonzalez: Thanks for having me.

Hong Kong was actually created by the British in the very sad circumstances of the 1840s because of the Opium War, but then it became a very successful place. It was a British colony until 1997 when it was handed over to China.

Gonzalez: Yeah, 2047, and until then it’s supposed to be “one country, two systems.” Hong Kong will keep its way of life, its capitalist economy, its freedoms. They have the rule of law.

A trial in Hong Kong is a legitimate thing. It’s not like a kangaroo court as it is in China. So nobody wants to be tried in a Chinese court in mainland China, whereas Hong Kong, the 7 million people who live in Hong Kong, expect a fair trial.

That’s the reason why they don’t want to be kidnapped. Basically, that’s what it would be, being kidnapped out of the lobby of the Mandarin Oriental in downtown Hong Kong and sent over to China to the tender mercies of the Chinese Communist Party, which is the equivalent of medieval Europe.

Davis: Well, we’ve seen this in other contexts where China will make a deal, but then try to get away with as much as it can despite that deal. What mechanism is there for enforcing this? When the British made this deal with China, how was it expected that China would be forced to abide by it?

Gonzalez: Well, there is such a thing as honor. If you put your name on something, if you’ve given your word—and now it’s an international treaty entered into the United Nations—it’s between the United Kingdom and the People’s Republic of China. So, China gave its word, and now it is going back on it.

The current chief executive is Carrie Lam. She says that, A, she’s doing this with … and it’s not been ordered by China to do this, and, B, she’s doing this also because she doesn’t want Hong Kong to become a place for fugitives. None of these two assertions pass the laugh test.

It is clear that if she’s doing this on her own. Then you have to ask why a Hong Kong person would be consigning her 7 million compatriots to the unruly, ruled-by-fiat, kangaroo courts of the PRC, of the People’s Republic of China.

And, B, nobody thinks that Hong Kong is going to become a haven for international fugitives. It hasn’t become one till now. Why would it now all of a sudden become a … on the contrary, Hong Kong truly … there’s very little or no corruption in Hong Kong. They have a very good record on this. There’s no administrative corruption. It’s like Singapore in that sense … but whereas in China, businesses have to pay protection.

Imagine, let me pause at a scenario here, an American businessman whose partner in China is demanding outlandish intellectual sharing or outlandish payments, does not want to pay and goes to Hong Kong, and all of a sudden he’s going to be grabbed out of Hong Kong and sent to China to be tried.

Or an American journalist, who’s reporting freely in Hong Kong, all of a sudden is going to be sent to mainland China.

In mainland China, “libel,” quote-unquote, is an imprisonable offense, and libel could be anything. Any criticism of the Chinese Communist Party or China’s unelected leaders or of Chinese businesses, any criticism could be termed … it could be considered libel.

And then all of a sudden an American journalist who’s writing for The New York Times or for whomever is sent to China to be tried for this. It’s unthinkable.

Hong Kong is based on the free movement of goods and people and capital, and they’re really killing the goose that laid the golden egg here.

Trinko: You mentioned that Carrie Lam was picked by China?

Trinko: But what about the other legislators in Hong Kong? I saw reports referring to the legislature as having a pro-China tilt at this point in time. Why would Hong Kong, if they’re this upset about stuff like this, be choosing people like this to represent them?

Gonzalez: Very good question, and that’s because they were not chosen. Hong Kong has LegCo, the Legislative Council, [which] is divided between a group that is freely elected and a majority that is elected by, quote-unquote, “functional constituencies.”

Many of these are controlled by China, so of the people who are freely elected, nearly all of them, if not all of them, want democracy and want to continue to have Hong Kong’s way of life.

Hong Kong’s opposition completely overwhelms the section of LegCo that is freely elected. It’s only through the legerdemain of the functional constituencies that China’s able to rig the system of LegCo as well.

Davis: There were big protests back in 2003, and then in recent years the Umbrella Protests led by students. How does this protest fit into Hong Kong’s history of protests?

It is a very advanced, extremely advanced, prosperous society that does care about being successful in business. That is all to its credit, but it also cares about the things that contribute to business success, which is freedom of speech, freedom of actions, freedom of conscience, all these natural rights that China just plainly does not respect.

Trinko: You spent many years in Hong Kong. Are you hearing from people over there, what they’re thinking about things right now? Do you think there’s any chance that Hong Kong is able to beat this back? Or what do you think’s going to happen?

Gonzalez: I don’t know because Carrie Lam is … a very stubborn person, and she says that there’s going to be a second reading of this law, I believe on Wednesday, in the LegCo, and she’s determined to ram this through.

She, obviously, thinks she has a constituency of one, of Xi Jinping, the general secretary of China, China’s leader—some would say China’s dictator—whom obviously she wants to please.

It is a debate, whether the continuation of Hong Kong’s success is a slap in the face of the Chinese Communist Party because it is not a city that was created by China. It was a city, but it was created by the Brits.

It was British rule of law married to Chinese entrepreneurialism, to Chinese work ethic, and what it produced was immeasurable success.

Davis: Well, it looks like a dark situation, but we’ll keep following it. Mike, always appreciate your insights. Thanks for being on here.

Gonzalez: Thank you very much. Thanks for having me.