Why So Many Mass Shootings? Ask the Right Questions and You Might Find Out 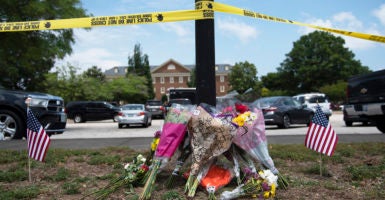 People from the community slowly arrive with flowers to pay their respects to the victims of a deadly shooting at a Virginia Beach public works building, that claimed the lives of 12 people in Virginia Beach, Virginia on June 1. (Photo: Marvin Joseph/The Washington Post/Getty Images)

This past weekend, Americans learned of another mass shooting, this time by an employee who decided to murder as many of the people he had worked with for years as possible. As of this writing, the murder toll is 12 people.

Every American asks why. What was the killer’s motive? When we read there is “no known motive,” we are frustrated. Human beings want to make sense of life, especially of evil.

Liberals (in this regard, liberals’ views are essentially as the same as leftists’) are virtually united in ascribing these shootings to guns. Just this past weekend, in a speech in Brazil, former President Barack Obama told an audience:

“Our gun laws in the United States don’t make much sense. Anybody can buy any weapon any time — without much, if any, regulation. They can buy (guns) over the internet. They can buy machine guns.”

That the former president fabricated a series of falsehoods about the United States — and maligned, on foreign soil, the country that twice elected him president — speaks to his character and to the character of the American news media that have been completely silent about these falsehoods. But the main point here is that, like other liberals and leftists, when Obama addresses the subject of mass shootings — in Brazil, he had been talking about the children murdered at Sandy Hook Elementary School in 2012 — he talks about guns.

Yet, America had plenty of guns when its mass murder rate was much lower. Grant Duwe, a Ph.D. in criminology and director of research and evaluation at the Minnesota Department of Corrections, gathered data going back 100 years in his 2007 book, “Mass Murder in the United States: A History.”

Given the same ubiquity of guns, wouldn’t the most productive question be what, if anything, has changed since the 1960s and ’70s? Of course it would. And a great deal has changed. America is much more ethnically diverse, much less religious. Boys have far fewer male role models in their lives. Fewer men marry, and normal boy behavior is largely held in contempt by their feminist teachers, principals and therapists. Do any or all of those factors matter more than the availability of guns?

Regarding ethnic diversity, the countries that not only have the fewest mass murders but the lowest homicide rates as well are the least ethnically diverse — such as Japan and nearly all European countries. So, too, the American states that have homicide rates as low as Western European countries are the least ethnically and racially diverse (the four lowest are New Hampshire, North Dakota, Maine and Idaho). Now, America, being the most ethnically and racially diverse country in the world, could still have low homicide rates if a) Americans were Americanized, but the left has hyphenated — Balkanized, if you will — Americans, and b) most black males grew up with fathers.

Regarding religiosity, the left welcomes — indeed, seeks — the end of Christianity in America (though not of Islam, whose robustness it fosters). Why don’t we ask a simple question: What percentage of American murderers attend church each week?

Yet, the Times has published columns and “studies” showing how relatively unimportant fathers are, and more and more educated women believe this dangerous nonsense.

Then there is marriage: Nearly all men who murder are single. And their number is increasing.

Finally, since the 1960s, we have been living in a culture of grievance. Whereas in the past people generally understood that life is hard and/or they have to work on themselves to improve their lives, for half a century, the left has drummed into Americans’ minds the belief that their difficulties are caused by American society — in particular, its sexism, racism and patriarchy. And the more aggrieved people are the more dulled their consciences.