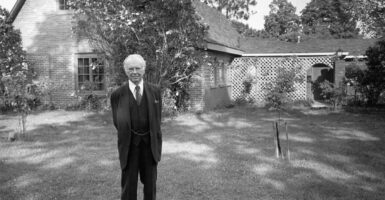 Far from the madding crowd, in the middle of Michigan’s lake-dotted stump country, a special occasion is taking place in the tiny town of Mecosta. Here, a group of conservatives, including the pre-eminent historian of American conservatism, George Nash, will celebrate the 25th anniversary of the Russell Kirk Center today.

Since it is also a quarter of a century since his death, it is possible that younger readers may not be familiar with Kirk and his indispensable contributions to the conservative movement. They include:

Kirk authored “The Conservative Mind,” a classic work on America’s conservative legacy dating from the founding of the American republic and continuing into the 20th century. Not only does Kirk offer a succinct definition of conservatism (change is inevitable but ought to be gradual, “never unfixing old interests at once”), but also a series of brief profiles of John Adams, Daniel Webster, Henry Clay, Orestes Brownson, T. S. Eliot, Edmund Burke, and Benjamin Disraeli.

A case in point is William F. Buckley, Jr., who in his 1951 book “God and Man at Yale” labeled himself an “individualist,” deliberately rejecting the word “conservative.” In 1955, when he founded National Review and two years after “The Conservative Mind,” Buckley used just one word to describe the magazine and himself—“conservative.”

Almost as important as “The Conservative Mind” was “The Roots of American Order,” in which Kirk uses the device of five cities (Jerusalem, Athens, Rome, London, and Philadelphia) to explain the origins of America’s moral, intellectual, cultural, and political foundation.

In summary, there is Jerusalem and the Judaic belief in one God; Athens and its exploration of political philosophy; Rome and its invention of a republic and its respect for the rule of law; London, the mother of parliaments; and Philadelphia, birthplace of the Declaration of Independence and the U.S. Constitution.

Kirk’s genius and his ability to summarize complex ideas were revealed to me one day when I complimented him for his five cities concept. “Oh?” he replied with some surprise, “I thought it fairly obvious.”

For more than 40 years and in more than 30 books, as the scholar George Panichas wrote, Kirk fought on the front line in the war of ideas, always defending and promoting “the permanent things,” such as order, freedom, and justice.

The Heritage Foundation acclaimed him, as is evident from his over 40 lectures at Heritage, more than any other outside speaker. We established the Kirk Lecture Series, enabling leading intellectuals—most recently professor Wilfred McClay and author Robert Reilly—to look at America and the conservative movement through a Kirkian lens.

Kirk never despaired, even when chaos seemed to reign in our cities and towns. In the last chapter of his last book, “The Sword of Imagination,” he posed the question, “Is life worth living?” and firmly replied, “Yes!” He offered his life as proof, saying that he had sought three ends in his lifetime:

First, to conserve a patrimony of order, justice, and freedom; a tolerable moral order; and an inheritance of culture. The central importance of imagination was a fundamental Kirkian belief. He thought he had succeeded in “reminding people that truth was not born yesterday.”

Second, to lead a life of decent independence, living much as his ancestors had lived, on their land, in circumstances that would enable him to utter the truth and make his voice heard.

And, third, to marry for love and to rear children who would come to know that the service of God is perfect freedom. His indefatigable widow Annette, founder and president of the Kirk Center, acknowledges their loving marriage of 30 years, while their four beautiful daughters and many grandchildren prove that God is love and love is God.

So, let us congratulate the Kirk Center on its 25th anniversary and wish Annette and her colleagues well in their mission to preserve and protect ordered liberty from sea to shining sea. Let us draw a lesson from Fulbert of Chartres, who in medieval times declared that we moderns—people of his age—are dwarfs standing on the shoulders of giants. We see farther than do the giants, Fulbert said, but merely because we are mounted on their shoulders.

Even so, in these troubled times, are we fortunate to stand on the shoulders of a conservative giant like Russell Kirk.