This Man Helped Bring Conservatism Back to Life 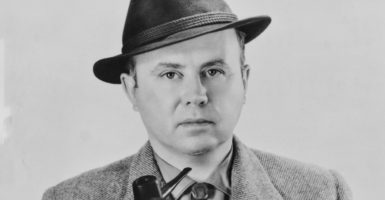 It’s been nearly a quarter of a century since the passing of intellectual historian and “master of letters” Russell Kirk, but his influence, far from waning, seems to be increasing.

This year marks what would have been his 100th birthday, and there have been celebrations in Washington, D.C.; New York City; New Haven, Connecticut; and his hometown of Plymouth, Michigan, at which conservative leaders have acknowledged his signal contributions to the modern American conservative movement.

In 1950, the nation’s most prominent intellectuals, including the then-reigning liberal critic Lionel Trilling, proclaimed there was only one tradition in America—the liberal tradition. Trilling dismissed conservatism as a movement without ideas except for occasional “irritable mental gestures.”

They could not deny—and glowing reviews in The New York Times, Time, and elsewhere confirmed—that Kirk had written a superb history of a conservative tradition in America stretching back to John Adams and the founding and continuing into the 20th century with T. S. Eliot.

In fact, Kirk gave the conservative movement its name.

We can be grateful to Kirk for “The Conservative Mind,” because otherwise, we might well be calling ourselves the “individualist movement,” a phrase that doesn’t come tripping off the tongue.

I was privileged to participate in the New Haven conference, sponsored by the William F. Buckley Jr. Program at Yale, led by the omni-competent Lauren Noble (Yale ’11), who has made the Buckley Program the center of “intellectual diversity” at Yale.

Noble has persuaded distinguished speakers to come to Yale, sponsored “Firing Line” debates, and invited academics like best-selling author Stephen Hayward to hold seminars. The program points to some 300 mostly undergraduate student fellows as proof of its success.

All this has been accomplished without a dollar from Yale or the federal government.

Along with her impressive managerial talents, Noble has turned out to be an accomplished fundraiser. Wouldn’t it be wonderful if the students and the alumni at other universities sought to replicate the Buckley Program at their schools?

As you might suspect, there were questions at the Yale meeting about the current state of the conservative movement. I quoted Kirk saying that conservatives must reconcile individualism with the sense of community. They must open the eyes of the electorate to a central concept of politics—that the claims of freedom and the claims of order can be kept in a healthy tension, avoiding extremes.

The political vehicle by which that tension can be maintained is the Constitution, with its time-tested checks and balances.

I pointed out that, in “The Conservative Mind,” Kirk proposes conservative alternatives to liberal nostrums.

Instead of secularism, the conservative looks to a transcendent order that rules society, as well as personal conscience.

Instead of socialism, the conservative declares that freedom and private property are inextricably linked.

Instead of radical change, the conservative says that society must change, but prudently, lest it lose what it has gained through the ages. (I had explored these same Kirkian canons in a lecture earlier in the year at The Heritage Foundation.)

The road to a land of individual freedom and responsibility, Kirk asserted, is through belief in something greater than anyone of us.

“Culture,” he insisted, “a civilization, cannot long survive the extinction of a belief in a transcendent order that brought the culture into being.”

However, the keynote speaker, columnist George Will, disagreed with Kirk’s emphasis on a transcendent being, arguing that the most prominent Founders were deists, not Christians. They were creatures of the Enlightenment, Will said, who looked to the reason of man, rather than the direct inspiration of God, for guidance. He supplied a number of quotes by Washington, Jefferson, Madison, and even Adams to prove his thesis.

Will studied at Oxford and has a doctorate from Princeton University and is one of the most learned of our public commentators, but a few minutes with The Heritage Foundation’s “The Founders’ Almanac” would have provided him with quotations by the Founders that might well have persuaded him to reconsider his deist thesis.

Religion and morality are the most important sources of character, Washington said, because they teach men their moral obligations and create the conditions for decent politics.

That was the case with Kirk, who, in his final book, “The Sword of Imagination,” wrote that in his lifetime, he had sought three things: To defend the permanent things and create a patrimony of order, justice, and freedom; to lead a life of decent independence, “uncluttered and unpolluted,” not devoted to getting and spending; and to marry “for love” and to rear children who would come to know that “the service of God is perfect freedom.”

Through his own efforts, and with the help of what he called “a mysterious providence,” his wishes were granted, and an example was set for members of the rising generation who are searching for heroes to emulate.

They need look no further than Russell Kirk.