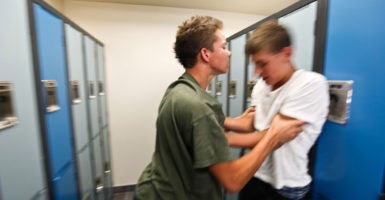 Gerald Watson, a high school freshman in Washington, D.C., died in December after he was chased down and shot 17 times near an after-school program center.

His killing occurred less than four miles from the U.S. Capitol Building.

Watson’s death reverberated through the local community, affecting its youngest members. Marilyn Wiggins, a volunteer at the TraRon Center, recalled her grandson struggling in the aftermath of the shooting.

Recognizing the reality of unsafe situations for too many schoolchildren in Washington, D.C., Rep. Jim Banks, R-Ind., took steps last month with a new proposal that provides child-safety accounts to children in dangerous school settings in the nation’s capital.

Students who suffer from bullying, sexual harassment, or violence could use their child-safety account to pay for tuition at private schools of their choice. Instead of being trapped by their ZIP code, children could attend schools where they can flourish.

The Independent Institute’s Vicki Alger and Timothy Benson of the Heartland Institute noted the helplessness many low-income families face when their local public school is unsafe.

“Unless parents can afford to send their children to a private school or home-school them, their child’s fate is often at the whim of circumstance and an entrenched bureaucracy,” they explain.

Tragically, the effects of violence are pervasive in many students’ lives at school and in the surrounding D.C. neighborhoods.

Even the schoolhouse—long idealized as a refuge for children—struggles to provide solace and sanctuary.

In light of their toxic environments, 10 percent of high-school students reported skipping school in the prior 30 days because they felt unsafe at school or on their way to school.

All children deserve an education in a safe and effective learning environment, and the fact that so many children feel unsafe in the nation’s capital should be a priority for Congress, since Washington, D.C., is the only the school district under congressional authority.

Banks’ child-safety accounts take ownership of Congress’ special relationship with education in Washington, D.C., and seek to ameliorate the circumstances of children in unsafe schools.

In addition, families would be able to use new D.C. tax-credit scholarships to “top off” their child-safety accounts for additional expenses. For instance, these scholarships can make the difference in private-school tuition, pay for textbooks, tutoring, college courses, and therapy to cope with trauma.

Banks also has introduced a proposal to provide education savings accounts to another group of students that Congress has authority to extend education choice to; namely, students of active-duty military families.

A safe school environment is one of the top three factors for parents when choosing a school, as a recent study by The Heritage Foundation’s Lindsey Burke and EdChoice’s Jason Bedrick showed.

And the Independent Institute’s Alger noted parents’ rapidly growing fears about school safety. She wrote, “Today, one in three parents are fearful about their child’s physical safety at school—up significantly since 2013, when just over one in 10 parents expressed such fear.”

Congress has long recognized its special responsibility to the children of Washington, D.C., which is one of the most notorious school districts in the nation.

In 2003, the life-changing D.C. Opportunity Scholarship Program was established, providing 1,600 children a year in the District with a voucher to attend a safe and effective school.

The best way to answer the clamors of parents and students for safe schools is to empower them with choice. Expanding choice to students through child-safety accounts is an important policy step in the right direction to accomplish that goal.