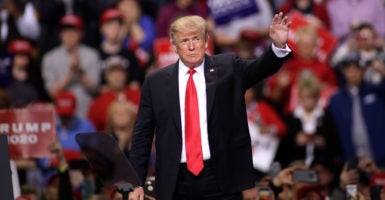 President Trump waves to the crowd after a rally on April 27, 2019, in Green Bay, Wisconsin. (Photo: Darren Hauck/Stringer/Getty Images)

One way of envisioning the Democratic obsessions with Donald Trump is as an addiction.

We have seen the initial impeachment efforts; the attempt to get him under the emoluments clause, the Logan Act and the 25th Amendment; the Russian collusion hoax; the Mueller investigation; the demand for his tax returns; and the psychodramas involving Michael Avenatti, Michael Cohen, and Stormy Daniels.

Relentless progressives have needed a new Get Trump fix about every two months.

More practically, their fixation also substitutes for a collective poverty of ideas. The Democratic Party has no plan to secure the borders other than to be against whatever Trump is for.

It would not build a wall, deport illegal entrants, end sanctuary cities, fine employers, or do much of anything but allow almost anyone to enter the U.S.

The homeless crisis is reaching epidemic proportions in our cities, almost all of them run by progressive mayors and city councils. None have any workable plan to clean the sidewalks of needles and human excrement.

None know what to do with the hundreds of thousands who have camped out in public spaces, endangering their own health and everyone around them due to drug addiction and inadequate sanitation and waste removal.

On abortion, the new Democratic position seems to be that the unborn can be aborted at any time the mother chooses, up to and including the moment of birth.

The Green New Deal has been endorsed by most of the current Democratic primary candidates, even though they privately know its utopian fantasies would shut down the U.S. economy and destroy the present prosperity fueled by record energy production, deregulation, and tax reform and reduction.

Abroad, were Democrats for or against abrogating the Iran nuclear deal, moving the U.S. Embassy in Israel from Tel Aviv to Jerusalem, and prodding China to follow reciprocal trade rules?

How do they propose to deal with North Korean nuclear-tipped missiles that seemed to suddenly appear as Barack Obama left office?

Have Democrats proposed canceling the new pipeline construction that Trump has fast-tracked? Would they scale way back on the natural gas and oil production that has made America energy-independent and on the cusp of becoming the world’s greatest energy exporter?

Democrats have occasionally talked of implementing reparations for slavery, a wealth tax and free college tuition, and of eliminating college debt, Immigration and Customs Enforcement, and the Electoral College.

Yet they have never spelled out exactly how they would enact such radical proposals that likely do not appeal to a majority of the population.

For now, no one has much of an idea what Democratic candidates would actually do, much less how they would do it.

Instead, the fallback position is always that “Trump stole the 2016 election,” “the Mueller report did not really exonerate Trump of collusion and obstruction,” and “Trump must be impeached or somehow stopped from finishing his first term.”

When the Mueller report found no collusion and no indictable grounds for obstruction of the non-crime of collusion, for a moment progressives suffered an identity crisis.

The temporary paralysis was prompted by the terror that without a crusade to remove Trump, they might have to offer an alternative vision and agenda that would better appeal to 2020 voters.

The Democratic establishment has become something like novelist Herman Melville’s phobic Captain Ahab, who became fatally absorbed with chasing his nemesis, the albino whale Moby Dick.

The great white whale once ate part of Ahab’s leg, and he demands revenge—even if such a never-ending neurosis leads to the destruction of his ship and crew.

Democrats can never forgive Trump for unexpectedly defeating supposed sure winner Hillary Clinton in 2016 and then systematically—and loudly—undoing the eight-year agenda of Obama.

So far, Trump seems to have escaped all of their efforts to spear and remove him before the 2020 election. Trump, like Moby Dick, seems a weird force of nature whose wounds from constant attacks only seem to make him more indestructible and his attackers even more obsessed with their prey.

Even if the quest to destroy Trump eclipses every other consideration and entails the destruction of the modern Democratic Party, it seems not to matter to these modern Ahabs.

Getting Trump is all they live for—and all they have left.