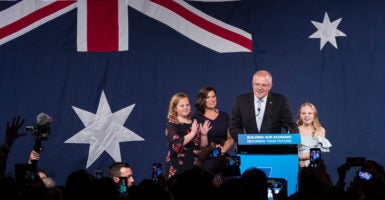 When Australians went to the polls over the weekend, it was universally expected that the left-wing Labor Party would emerge the winner.

To the shock of the pollsters, however, the left lost.

In Australia, the Liberals are the conservative party, and so it was the conservatives who won a surprise victory. In a 151-seat House of Representatives, the Liberal Party, with its longtime coalition partner the Nationals, have so far won (or lead in) 78 seats, with Labor well behind at 67 seats, and six seats going to minor parties.

The Labor leader, Bill Shorten, has already resigned, saying, “It is obvious that Labor will not be able to form the next government.”

Morrison ran a canny campaign that allowed his party to recover after it ousted Malcolm Turnbull, the former Liberal prime minister, last August.

A social conservative and devout Christian, Morrison’s appeal was folksy, with slogans like “a fair go for those who have a go.” In the U.S., we’d say “a fair deal if you try.” Different words, but the same sentiment.

Labor, by contrast, ran mostly on climate change. On Sunday, in fact, The New York Times led with the story “It was supposed to be Australia’s climate change election. What happened?”

What happened was very simple: The silent majority turned out to be more interested in prosperity and job creation than they were in promises to clamp down on coal mining.

That majority was very silent. Labor was ahead on every single election poll for the past month. It even led in the exit polling. The Australian people did not want to tell the pollsters that they had voted conservative, but they did actually want to vote conservative.

Apart from the stunning Liberal victory, the most surprising thing about the election was how well two smaller parties did. The big parties all lost votes. The Liberals lost 0.6% of their vote from the last election in 2013, while Labor lost 0.9%. The Greens were also down 0.2%.

The only parties that gained a significant number of votes? Two right-wing populist parties, the United Australia Party and the One Nation Party, which together picked up 5.1% of the vote.

The Australian conservative victory wasn’t the only significant election result in Asia over the weekend. India also finished its long election process, and there, Prime Minister Narendra Modi appears to have won a major victory, winning between 280 and 315 seats in Parliament. Modi needs only 272 seats for a majority.

When coupled with Prime Minister Benjamin Netanyahu’s victory in April elections in Israel, the electoral results of the past few months have seen surprising victories for conservative parties.

Australia, India, and Israel are remarkably different places. Their definitions of “conservative” also differ. You can’t draw any big lessons from all of these victories—except that parties from the right end of national political spectrums are often more popular than the pollsters recognize.

But certainly, the lesson from Australia for the beleaguered Conservative Party in Britain is clear. Being behind in the polls is not a death sentence.

Conservatives need to avoid fashionable causes, and emphasize the basics—economic competence, fairness for those who try, law and order, national defense, and national sovereignty.

In Britain, support for the Conservative Party has collapsed over the past year, with one influential pollster commenting:

While one can never be certain about what has caused changes in voting intention, it is hard to avoid the obvious conclusion that they are shedding support to more unambiguously pro-Brexit parties like UKIP and the Brexit party. … Across the board, Conservative support seems to be falling away.

British Prime Minister Theresa May has completely failed to do conservative things, and so, 63% of her own supporters say she has been a poor or a terrible prime minister.

May’s time, as that pollster put it, is therefore “essentially up.” Her successor had better learn the lesson from Australia—and learn it fast.