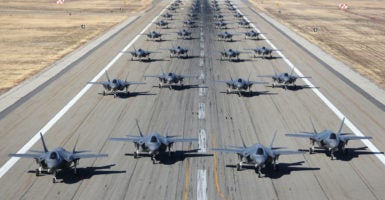 Air Force Bases 388th and 419th fighter wings line up 36 F-35As on the runway to prepare for take-off on Nov. 19, 2018, in Hill Air Force Base, Utah. Lawmakers decided to purchase an additional 12 of the “most dominant and lethal multi-role weapons system in the world,” the F-35A. (Photo: George Frey/Getty Images)

The House Appropriations defense subcommittee has slashed the Pentagon’s reprogramming authority by 75% in the approved defense appropriations bill reported out on May 15.

The move comes as a response to the Trump administration’s use of reprogramming authorities to move resources from the Pentagon to the Department of Homeland Security to help tackle the challenges at the southern border.

If it were to make it into law, this loss of reprogramming authority would create serious obstacles in properly managing the defense funds as the Pentagon executes its budget.

As expressed by Robert Hale, former comptroller at the Pentagon:

Restriction or elimination of reprogramming would significantly harm the [Department of Defense’s] ability to manage its money to meet national security needs effectively.

To meet congressional timelines, the [Defense Department] must formulate its budgets two or more years before all funds are obligated.

Inevitably, needs change, creating higher priorities for some projects and lowering them for others. In these cases, reprogramming permits effective management. In different circumstances, reprogramming can avert crises.

This loss of authority is among the most impactful changes in the legislation, since it would hamstring the Pentagon by taking away what little budget flexibility it has.

That was despite John Venable, senior research fellow in defense policy at The Heritage Foundation, making the persuasive case that it’s not a wise investment, because it wouldn’t survive in high-threat environments and it’s not cheaper than the F-35.

Conversely, the lawmakers did decide to purchase an additional 12 of the “most dominant and lethal multi-role weapons system in the world,” the F-35A.

That’s a great development, one that will undoubtedly help the Air Force increase its fighter count.

Another laudable action taken in the defense appropriations bill was to transfer, back to the base budget, the money that the president’s budget stashed away in the overseas contingency operations account.

Heritage has long argued for the account being dedicated to true emergencies and not being used as a tool to supplement underfunded defense budgets.

Our servicemen and servicewomen—and the American people—deserve a properly funded military, not one that relies on one-year patches through emergency spending gimmicks.

Regrettably, the funding in the defense appropriations bill is lower than the president’s budget request, and it’s below what’s needed to implement the National Defense Strategy. The funding is an increase and a step in the right direction, but falls short.

The legislation also delays the implementation of a Space Force by requiring another study and refinement of plans for “the potential establishment of a Space Force as a branch of the Armed Forces.” That  study will have $15 million allocated to it.

All in all, the passage of the defense appropriations bill through the subcommittee represents a necessary step toward attaining a defense budget on time, in the hope that the Pentagon can avoid the challenges associated with continuing resolutions.

There’s still a lot of work to be done in order to improve the bill and better serve the nation and our military. This bill represents just one small step toward funding the Pentagon in fiscal 2020, but it’s a wobbly step forward that will require a lot of adjustments.