House Democrats Are Shortchanging the Military 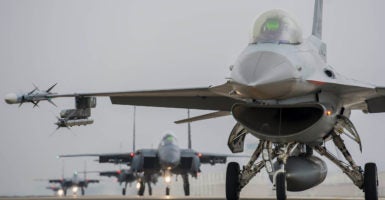 House Democrats have proposed $622 billion for the Department of Defense, less than half of what the president's budget calls for. (Photo: NurPhoto/Getty Images)

House appropriators have now released their budget top lines for every government agency, and their number for the Department of Defense shows they acknowledge the defense budget needs an increase.

But that increase still isn’t enough, as it falls short of the president’s budget request and of what the military needs to continue its rebuild.

The numbers released by Democrats, who control the House of Representatives, shows $622 billion for the base defense discretionary budget. That would be a 2.3% increase over the 2019 enacted budget.

It’s a good initial step that highlights a bipartisan understanding on the need to properly fund our national defense and make sure that our military has the necessary tools to engage in the great power competition outlined by the National Defense Strategy.

It is directionally correct, but Congress and the nation need to be more ambitious.

Former Defense Secretary James Mattis and the chairman of the Joint Chiefs of Staff, Gen. Joseph Dunford, have expressed multiple times that the Department of Defense requires between 3% and 5% real growth in the coming years in order to keep pace with the current threats facing our nation.

As the Heritage Foundation’s 2019 Index of U.S. Military Strength shows, the military has seen improvement in its readiness, capacity, and capabilities because of the extra resources dedicated to it over the past two budget cycles.

Nonetheless, these gains need to be consolidated over time with continuous investments and improvement. The current emphasis on readiness recovery is especially fragile, because we’re dealing with human beings that need constant practice to keep their skills updated and sharp.

Furthermore, many of the investments in new platforms will take years to come to fruition.

For instance, an aircraft carrier contracted in January 2019 has a delivery date of March 2028. Or take the controversial F-15X. The Air Force wants to purchase eight of them in 2020, and the first two have a delivery date of June 2022. Even the Army is aiming to reach its readiness goals by 2022 and then focus on actualizing its modernization efforts.

These efforts will take time and persistent attention.

The military will not be fully ready in a couple of years and then everyone can go to Florida to relax on the beach. It requires a long-term vision and perspective.

One only needs to look at China, our pacing military threat, to get a better understanding of the time horizon of the challenge. The goal of the Chinese Communist Party is to have a modern military force capable of operating jointly in every domain of warfare by 2049. Talk about a long game.

If the United States wants to be able to counter Chinese ambitions, it needs to make sure we’re doing today what will help make us ready in the future.

That starts with recognizing the need to properly fund our military—and to do it.