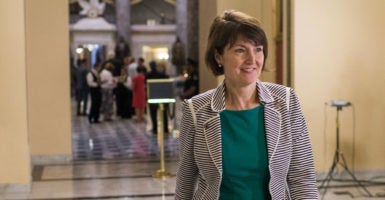 “It’s leaders like Susan B. Anthony ... who have inspired generations of women to live their dreams, to be courageous, and be risk-takers,” Rep. Cathy McMorris Rodgers, R-Wash., says. (Photo: Zach Gibson/Stringer/Getty Images)

Lawmakers took to the floor of the House of Representatives on Tuesday to commemorate the 100th anniversary of action on the constitutional amendment granting women the right to vote.

The House passed what would become the 19th Amendment to the Constitution by a vote of 304-90 on May 21, 1919. The amendment was ratified by the required three-fourths of the states and became the law of the land a little over a year later, on Aug. 18, 1920.

“Madame Speaker,” Rep. Cathy McMorris Rodgers, R-Wash., said Tuesday, “I rise today to celebrate the bold trailblazers like Susan B. Anthony, a pro-life Republican, [and] Emma Smith DeVoe and May Arkwright Hutton, who both led the suffrage movement in Washington state.”

“It’s leaders like Susan B. Anthony and others who have inspired generations of women to live their dreams, to be courageous, and be risk-takers,” McMorris Rodgers, who until January was the highest-ranking woman in the Republican caucus, said in remarks prepared for delivery. “They fought to make sure the promise of America was available to women from all walks of life, so ‘we the people’ are able to make our voices heard.”

Those speaking from the other side of the aisle included Rep. Chrissy Houlahan, D-Pa.

“I stand here inviting all the young girls to see me, to see the record number of women in this Congress, and to see women leaders across our [state], our country, and our world. See us, and in us, see a world of possibility.”

Other lawmakers turned to social media to celebrate the 100th anniversary of House action on the 19th Amendment.

“One hundred years later to date, we reaffirm our support of women and the value they bring to this country,” Rep. Mike Johnson, R-La., chairman of the Republican Study Committee, tweeted. “We honor the women of the past who courageously fought for what they believed in, and we recognize the women today who continue in their footsteps.”

“One hundred years after the House passed the 19th Amendment to give women the right to vote, the House counts more than 100 women among its members,” Lawrence tweeted. “Proud to be celebrating today with my #suffragesisters & #suffragents and working towards a better future for all!”

House Speaker Nancy Pelosi, D-Calif., hosted a reception to mark the anniversary, which featured remarks by female lawmakers and guests.

“We don’t forget the sacrifices, the struggles, and the hard-fought victory to secure women’s right to vote,” Heritage Foundation President Kay Coles James said at the event. “We were not given the right to vote, we took it.”

“Everything that happened in the past screams who we are today,” James said. “Every single woman in Congress is here because of the women who decades ago planted the seeds for justice.”