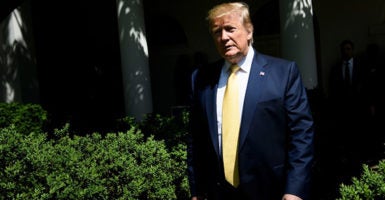 President Donald Trump wants to rally Republicans around new immigration goals and attract some support from Democrats. Pictured: The president arrives May 7 for an event in the Rose Garden of the White House. (Photo: Brendan Smialowski/AFP/Getty Images)

The president is set to deliver a Rose Garden address on the plan at 2:30 p.m. Thursday.

Trump wants more people coming to the country to fill new jobs in the expanding economy, and is concerned that Democrat lawmakers routinely stick together, especially in the Senate.

Senior administration officials contend Trump’s plan will make legal immigration more fair and is in the national interest. They contend that it will bring in, and keep, the best and the brightest legal immigrants.

The number brought in because of family already here—so-called chain migration—is expected to decline under the plan.

Senior administration officials noted Wednesday that Democrats already have come to the table with their non-negotiables, while Republicans still have several points of disagreement.

The president aims to find points that almost all Republican lawmakers can agree on.

Three categories would focus on “extraordinary talent” visas and vocation visas, and on keeping “extraordinary students” from abroad after they graduate from U.S. colleges.

The visas would be issued on a point-based system, more in line with Canada, Japan, New Zealand, and other countries, officials said.

While moving immigration policy toward a meritocracy, the plan still would prioritize spouses and children to achieve family reunification. But, senior administration officials said, the plan would not give an immigrant an unfair advantage to enter the United States simply because he or she has a relative already here.

Because the immigration-neutral, merit-based plan is aimed at uniting the president’s party, it doesn’t include language about the Obama administration’s Deferred Action for Childhood Arrivals program, or about a guest worker program.

Republicans have been divided on both issues.

The White House hopes to push Democrat opponents of the plan either to negotiate or argue for the status quo.

The border security portion of the plan includes a border wall and closing loopholes to end the policy known as catch and release.

Trump is frustrated with the current system, which releases hundreds of thousands of illegal border crossers pending a hearing because of a shortage of federal immigration judges.