Trump May Save Your Air Conditioner From the Deep State 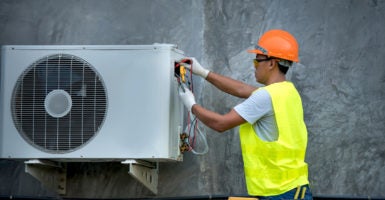 Ben Lieberman is a senior fellow at the Competitive Enterprise Institute specializing in environmental policy.

It happens every spring—on the first hot day, homeowners switch on their air conditioners that have sat idle since September, cross their fingers, and pray they get cold air.

For those that don’t work, the owners know they’ll soon be on the hook for a repair costing hundreds of dollars or a replacement costing thousands.

But what most don’t know is that bureaucrats in Washington have been targeting home air conditioners for decades, and that their regulations are partly responsible for the high cost of cooling off.

Thankfully, the Trump administration is holding the line against any more such measures, but the deep state continues to quietly work on several of them.

Even the regulations that are supposed to save consumers money can end up costing them. For example, the Department of Energy sets efficiency standards for both central air systems and window units, which in theory will reduce electric bills.

But over the last 30 years, the agency has set multiple rounds of successively tighter standards with diminishing marginal returns, and the last several raised the up-front cost of equipment more than many owners will ever earn back in the form of energy savings.

The worst of them, finalized during the Clinton administration and taking effect in 2006, not only resulted in a sharply higher price tag for central air conditioners—likely much higher than the Energy Department-predicted $335—but also resulted in much larger components, and thus higher installation costs as more homeowners had to have walls knocked out to accommodate them.

Not to be outdone, President Barack Obama adopted even more stringent air conditioner standards. In so doing, Energy Department bureaucrats dropped the pretense of putting consumers first by focusing on the claimed climate change-fighting benefits of more energy-stingy cooling.

The latest standard for window units joins a growing list of appliance regulations that even the Energy Department admits may raise the price tag more than the energy savings—which is particularly problematic, since window units are the most affordable option for low-income households.

The Trump Energy Department chose not to reverse these Obama-era air conditioner efficiency standards—which is a difficult task—but it is raising the bar on any further ones. The Energy Department is proposing that new standards can be set only if they deliver significant consumer benefits—a refreshing return to common sense.

But the legions of bureaucrats and lobbyists and activists who make their living off an endless stream of efficiency regulations are waiting for the next sympathetic president to roll out more pain for homeowners.

Beyond efficiency, Washington has also found fault with the refrigerants used in these air conditioners.

Starting in the late 1980s, the most effective refrigerants were scheduled for gradual phase-out on the grounds that they deplete the Earth’s ozone layer. The best refrigerant for cooling homes, HCFC-22, was banned by the Environmental Protection Agency for new equipment starting in 2010.

Small amounts on this refrigerant are still made for the millions of older systems still requiring it, but even that is scheduled to end next year.

Not surprisingly, HCFC-22 prices have jumped, from about $1 per pound wholesale prior to government restrictions to around 10 times that today, and a residential system can require up to 15 pounds.

Higher refrigerant prices are one reason why A/C repair costs have risen. Another is the EPA requirement that service technicians take steps to prevent refrigerant from escaping during repairs, which is time consuming and requires expensive equipment.

The Obama EPA expanded these requirements, but President Donald Trump may reverse some of them.

Inevitably, the repairmen take the brunt from angry customers, but much of the fault really lies with federal regulators.

Things might get even worse. The “eco-friendly” alternative for HCFC-22 used in many post-2010 air conditioners is now also being targeted by environmentalists, this time because it is a contributor to climate change. These activists have allied with opportunistic manufacturers that have patented climate-friendly substitute refrigerants that represent yet another step up in cost.

Obama agreed to a United Nations treaty provision called the Kigali Amendment, which would crack down on currently-used refrigerants in favor of these new ones, but he left office before submitting it to the Senate for the required ratification vote.

Trump has thus far shown no interest in doing so, but career bureaucrats and even a few on his White House team are trying to change his mind.

Trump himself has not spent any time talking or tweeting about air conditioning, so we don’t know for certain where he stands, but he does have the distinction of owning far more air conditioning than any previous president.

Perhaps that is why he has thus far stopped the regulatory onslaught on staying cool. Let’s hope it continues.