Bill Clinton Got His Supreme Court Pick While Under Investigation. Trump Should Get His. 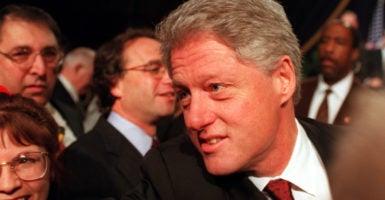 President Bill Clinton successfully nominated Ruth Bader Ginsburg to the Supreme Court in 1993, despite being under investigation. (Photo: A.C. Kidwell/KRT/Newscom)

Back in July, some Senate Democrats started demanding that the confirmation process for Supreme Court nominee Brett Kavanaugh be delayed until after the Mueller investigation is finished.

None of them, however, explained the connection between the two.

Now, after Michael Cohen’s guilty plea and Paul Manafort’s conviction stemming from the Mueller investigation, they are at it again. They make no more sense today than they did a month ago, especially given that some of those senators have openly opposed Kavanaugh from the get-go.

As I wrote in July, President Bill Clinton was under criminal investigation in 1993 when he nominated Supreme Court Justice Ruth Bader Ginsburg. The Senate voted 96-3 to confirm her nomination just 42 days later.

A year later, Clinton was actually under subpoena when he nominated Justice Stephen Breyer. The Senate voted 87-9 to confirm his nomination and no Democrat feigned concern or suggested delaying the confirmation process.

Eighty percent of Trump’s nominees to the U.S. Court of Appeals received a “well qualified” rating from the ABA—a higher percentage than any of the previous five presidents of both parties. Yet most Democrats voted against more than three-quarters of those nominees.

Let’s be honest, these Senate Democrats oppose Trump’s every policy, nomination, decision, thought, word, and deed. So does it surprise anyone that senators who are unalterably opposed to the president and to his judicial nominees would scrounge around for some way to interfere with the Kavanaugh confirmation process?

Schumer said in 2009 that a nominee’s judicial record is the best way to evaluate a nominee. Yet most Senate Democrats refuse to look at the 700 opinions that Kavanaugh wrote or joined over a dozen years on the U.S. Court of Appeals.

So does it surprise anyone that senators who aren’t even pretending to examine this nominee’s record or evaluate his qualifications would grasp at straws to disrupt the confirmation process?

The time between Kavanaugh’s nomination and hearing will be 25 percent longer than the last several Supreme Court nominees. The Judiciary Committee has made public hundreds of thousands of pages of documents relating to Kavanaugh’s executive branch service.

Yet Senate Democrats insist on seeing emails from hundreds of George W. Bush administration staffers, with whom Kavanaugh did not work, about matters for which Kavanaugh was not responsible.

So does it surprise anyone that senators—many of whom announced opposition to Trump’s nominee before they even knew who it was—would make fake “arguments” that serve only to degrade the confirmation process even further?

No, none of this surprises anyone.