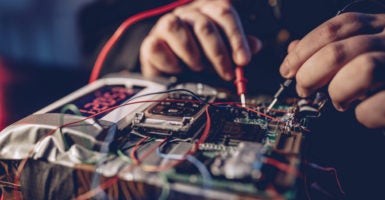 The FBI on April 26 arrested Mark Steven Domingo, a former Army infantryman, on charges of plotting an Islamist terrorist attack against a white nationalist rally in Long Beach, California.

Domingo first popped onto the FBI’s radar at the start of March, when he posted a message in a private group of a social media platform declaring his desire to commit an attack in the Los Angeles area.

He declared that “America needs another [Las Vegas] event,” referencing the deadly October 2017 mass shooting in Las Vegas that left 58 dead and hundreds injured, and posted that “there [must be] retribution” for the March 13 attack on a mosque and an Islamic center in Christchurch, New Zealand, according to federal prosecutors’ criminal complaint.

An online undercover agent reached out to Domingo and asked him what he was thinking about doing.

Domingo would meet with an undercover officer in person in the middle of March and discussed attacking Jewish targets, police officers, churches, and a military facility. He talked about attacks with improvised explosive devices and with firearms, expressing a desire to die in the attack, stating rather casually: “Martyrdom, bro.”

The undercover officer told Domingo that they knew of someone who could make an improvised explosive device. Domingo would continue to send the agent pictures of his firearms and ideas for various attacks.

By the end of April, Domingo had decided to attack a white nationalist rally that was supposedly going to take place in Long Beach. He brought one of his firearms with him to a meeting with the undercover agent to “show you that I’m serious.”

Domingo asked for help in making the improvised explosive device, and the agent told him that he would need to buy some components for the bomb, such as shrapnel.

Domingo went out and bought several pounds of 3-inch-long nails and gave them to the agent.

He then contemplated switching targets to the Santa Monica Pier in California, but ultimately settled on the white nationalist rally.

On April 24, Domingo decided it was time to move forward, and on April 26, he went to Los Angeles to meet with the agent and look over the bombs and surveil the park where the rally would occur.

After walking around the area to plan out the attack, Domingo took possession of an inert bomb and was taken into custody.

This disrupted plot was the 49thh time an undercover agent or sting operation resulted in stopping a terrorist attack before it could succeed.

Such operations are incredibly important because they minimize the chance for harm by gaining the would-be terrorists’ trust and stepping in before any attack can occur.

In these investigations, the FBI almost always coordinates the operation though the Joint Terrorism Task Force. The task force is led by the FBI, but brings in all other law enforcement agencies in the area to coordinate operations, avoid information falling through the cracks, and prevent different agencies from interfering with or harming an investigation.

L.A. Police Chief Michel R. Moore said about the task force in this case, “I can tell you unequivocally that this partnership, coupled with our ability to be nimble, ultimately resulted in dozens of innocent lives being saved in Southern California.”

Unfortunately, other cities on the West Coast have decided to abandon the task forces to signal their desire to ensure that no immigrant is deported.

Of course, anyone—illegal alien, legal immigrant, or American citizen—who is planning a terrorist attack should be stopped. And given the task forces’ role in stopping terrorism, cities like Portland and San Francisco are only putting their own residents in danger by refusing to cooperate.

Thankfully, the Joint Terrorism Task Force was successful this time in Los Angeles and stopped this terrorist attack before anyone was put in danger.