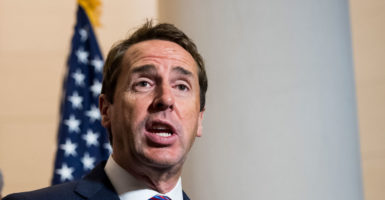 Republicans in the conservative House Freedom Caucus are opposing Democrats’ attempts to increase discretionary spending despite a national debt of more than $22 trillion.

“Our country is $22 trillion in debt,” the group said in a statement released Friday. “The spending caps are one of the few tools left to slow down the runaway growth of the federal budget. We will oppose another deal to blow through these limits.”

The Budget Control Act, passed in 2011, sought to curb government spending and control the growth of federal programs, capping discretionary spending at $1.07 trillion for fiscal year 2018, which began Oct. 1, 2017.

According to a recent opinion column by Justin Bogie, a senior policy analyst in fiscal affairs at The Heritage Foundation, Democrats are looking to raise the Budget Control Act’s discretionary-spending caps by at least $357 billion for 2020-2021.

Of the new funding, $178 billion would go toward national defense, while the other $179 billion would be reserved for domestic programs.

Government funding runs out at the end of the current fiscal year on Sept. 30, and The Hill reported that lawmakers implied there could be another government shutdown if Democrats and Republicans can’t agree on funding, including a $19 billion disaster-aid funding bill passed by House Democrats on Friday, but opposed by the Trump administration.

“Here is a real opportunity to tell people we are investing in their future,” said Rep. Pramila Jayapal, D-Wash., who co-chairs the Congressional Progressive Caucus, said of the proposed spending increases. “I mean, we are giving money to a Pentagon that is increasingly wasteful and hasn’t conducted an audit.”

But Republicans say raising the spending caps would be irresponsible.

“I agree with President Trump that we must get our deficits under control,” Harris said. “We must address this national security threat for the sake of our children and grandchildren.”

In a statement provided to The Daily Signal, Bogie called the Budget Control Act caps “one of the only means of fiscal restraint to rein in lawmakers’ addiction to spending.”

“The last two-year budget deal enacted by Congress is projected to add $2 trillion in new debt by 2028,” Bogie said, adding:

Congress should stick to the overall Budget Control Act caps for 2020-2021 and implement reforms that allow lawmakers the flexibility to prioritize constitutional priorities, such as national defense, within those caps.

Every day, American families are forced to live within a budget and sometimes make tough choices about how to spend their money. Congress shouldn’t be held to a different standard.