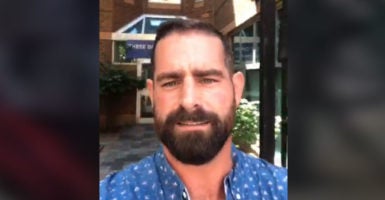 Democratic Pennsylvania state Rep. Brian Sims, who went viral for recording himself accosting pro-lifers praying outside a Planned Parenthood clinic, sparked backlash after posting a video addressing the controversy in which he again attacked pro-lifers.

Sims revealed in a video he posted Tuesday to Twitter that he has “spent the last seven years serving as a volunteer patient escort” at the clinic, and claimed he’s “seen firsthand the insults, the slurs, the attacks, and the racism those protesters direct at mostly young girls going there for clinic care.”

Sims provided no evidence of the alleged racism and harassment from pro-life demonstrators.

The state representative first went viral for posting a video of himself accosting an elderly woman praying outside the clinic. Additional video showed Sims had previously offered a $100 reward to anyone who could identify three teen girls Sims accosted while they prayed outside.

Sims didn’t apologize to the pro-lifers he accosted in the video he posted on Tuesday. Instead, he expressed regret for his tactics.

“What I should have shown you in that video was protesters gathered together to pray at, not to silently pray for, people coming out of Planned Parenthood as they intercepted them and harassed them,” Sims said, acknowledging Planned Parenthood’s “non-engagement policy.”

I will fiercely protect a woman’s right to make the best choices for her health & her body, unimpeded. I also know that two wrongs don’t make a right, especially on the front lines of a civil rights battle. I can do better, and I will do better, for the women of Pennsylvania. pic.twitter.com/jURL1UX9qE

“The words you are looking for are ‘I’m sorry,’” Fox News contributor Marc Thiessen told Sims. “And you should deliver that apology directly to the elderly woman and teen girls you verbally assaulted.”

You don’t “protect” women’s rights when you are trying to accost teenage girls and old women on the streets. And then encourage the Internet to dox them. Shameful and reprehensible for anyone, particularly an elected official. https://t.co/bet7g3h4nk

Was this supposed to be an apology? Rule 1 of PR: avoid apologizing at all costs but if you have to apologize, apologize completely and totally. This video extends – rather than ends – this controversy. https://t.co/Wr1VdxWYey

I am flummoxed by @BrianSimsPA 's prolife "racism" whistle. Like he's saying he's supportive of fewer black/brown people in the world but trying to make it sound like he's progressive. Wouldn't the 'racist' thing be to support aborting minority babies? https://t.co/guFqABYxg7