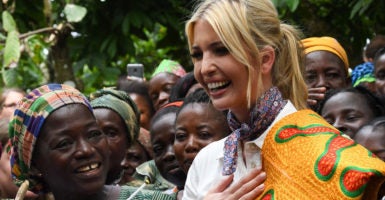 Highlighting her recent trip to Africa, Ivanka Trump penned a commentary that makes a strong case for the Trump administration’s Women’s Global Development and Prosperity Initiative.

“Despite the incredible difficulties they face, women in Africa are already transcending poverty, creating jobs, and pioneering a brighter future,” the first daughter wrote in an op-ed for CNN. “Now, we want to empower them, and their sisters, to unleash even greater economic prosperity and peace for the people of Africa, for our country, and for the world.”

The Women’s Global Development and Prosperity Initiative, which has involved the National Security Council, the State Department, and other relevant agencies, seeks to support women in the workplace, helping them succeed as entrepreneurs, and by advancing legal reforms that will create greater gender equality.

The imperative for women’s economic empowerment is quite clear. As articulated in the Trump administration’s National Security Strategy, “societies that empower women to participate fully in civic and economic life are more prosperous and peaceful.”

Indeed, empowering women with greater economic choice and control is really about advancing their economic freedom and participation in entrepreneurial undertakings.

As a vital component of human dignity and independence, economic freedom is valuable as an end itself, as well as a means. Economic freedom provides a proven pathway for sustainable development and prosperity. Advancing economic freedom is essentially about empowering individuals and enterprises through sound policies of market openness, regulatory efficiency, and limited government within the rule of law.

When women are empowered with more and greater opportunities as workers, innovators, entrepreneurs, and investors, communities flourish and economies expand.

A McKinsey Global Institute study estimates that advancing women’s role in the workplace could add $12 trillion to global gross domestic product—an amount equivalent in size to the current GDP of Germany, Japan, and the United Kingdom combined.

As The Heritage Foundation’s Index of Economic Freedom has documented, countries that implement free-market policies essentially enable women to make their own economic decisions.

Because economic freedom creates greater opportunities for entrepreneurship, there are also more and better jobs for women available in free economies than in less-free economies.

The constraints on economic empowerment for women are complex. However, women’s advancement and empowerment do not necessitate gender quotas or affirmative action.

What’s needed, above all, are free-market policies that allow women to make their own choices.

As outlined in the presidential memorandum on promoting women’s global development and prosperity, “accelerating women’s economic empowerment around the world is integral to enabling developing countries to achieve economic self-reliance and to become greater trading partners with the United States.”

In other words, ensuring and spreading economic freedom for women is the best way to empower them and to propel an economy forward.

The Women’s Global Development and Prosperity Initiative is pushing women’s empowerment to the front lines of U.S. foreign policy, particularly in Africa. It deserves the widest possible support.