Export-Import Bank Is Not the Way to Fight China 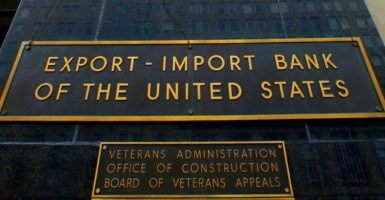 The U.S. economy is thriving, with impressive growth in gross domestic product, wage and employment gains, and record trade.

Those are the facts, in contrast to the rhetoric from proponents of the U.S. Export-Import Bank, which is misleading at best.

Although obscure to most Americans, the Export-Import Bank (aka Ex-Im) is the object of protracted debate in Congress—and the issue is heating up as the Sept. 30 expiration of Ex-Im’s charter draws closer.

President Franklin D. Roosevelt incorporated the bank in 1934, when U.S. exporters were desperate for overseas customers and foreign markets lacked capital to finance trade. Ever since, the bank has subsidized loans and loan guarantees as well as capital and credit insurance to benefit a select group of exporters, their overseas customers, and foreign governments.

But global trade today is vastly different, of course. Exports from all countries exceeded $23 trillion in 2017, and U.S. exports hit a record $2.5 trillion last year. And given the drawbacks of Ex-Im largesse, including disadvantaging U.S. firms that don’t receive subsidies, Congress should reject any attempt to renew the charter.

American exports have remained strong despite the bank being only partially operational since 2014, the last year a quorum of the board could be assembled. (There’s only one voting member, at present, along with two ex officio members.)

Meanwhile, the total value of U.S. exports has averaged $2.3 trillion annually since 2015.

Bank advocates insist nonetheless that Ex-Im subsidies are vital to U.S. exports. For example, U.S. Trade Representative Robert Lighthizer recently claimed that the lack of a fully functioning export credit agency is a “serious blow to the United States economy.”

But even when Ex-Im financing was at its peak, the bank only benefitted 2% of U.S. exports. The biggest beneficiaries were a handful of multinational corporations such as Boeing, Caterpillar, General Electric, John Deere, and other industrial titans. Indeed, Boeing alone garnered 70% of all Export-Import Bank loan guarantees and 40% of all authorizations.

Obviously, there is no shortage of private export financing. Even Boeing now relies on private capital for 96% of its commercial deliveries. In the absence of Ex-Im financing for its foreign customers, the company in 2018 delivered 806 airplanes generating revenue of $60.7 billion. Its backlog of orders at the end of last year totaled 5,900 commercial airplanes worth $490 billion.

The company’s 2019 Aircraft Finance Market Outlook forecasts another year of funding diversification, stating: “Airlines and lessors are expected to have some of their lowest historical costs of financing … . All-in-all, 2019 is expected to be another year of strong and efficient liquidity from diverse markets.”

China does indeed lavish a variety of subsidies on its exports. Medium and long-term export credits from the Chinese government totaled $36.3 billion in 2017, which constituted one-third of global export credit subsidies. (That’s up from $25 billion five years ago.)

(It is noteworthy that the U.S. Ex-Im has a long history of subsidies to China, including 11% of all authorizations in fiscal year 2014.)

In a recent report, Heritage Foundation research fellow Jeff Smith characterized the initiative as “arguably the most ambitious geostrategic initiative in contemporary history” through which Beijing plans to spend more than $1 trillion on new infrastructure and connectivity investments across the Indo-Pacific and Eurasian supercontinent.

U.S. Navy Secretary Richard Spencer describes the approach as “weaponizing capital.” The plan is even enshrined in the Communist Party Constitution.

Unless Congress wants to try to out-China China on economic nationalization, revitalizing Ex-Im would do nothing to counter the Belt and Road Initiative—or to halt China’s theft of intellectual property and other practices that constitute actual trade problems.

Countering the Belt and Road Initiative is a foreign policy issue, not an Ex-Im issue. As Smith noted:

The answer is not for America to create its own New Silk Road but for Washington to help establish and enforce new rules of the road; promote better standards, transparency, and a new vision for regional connectivity; shine a light on the risks and consequences of the [Belt and Road Initiative] where necessary; aid friendly countries subject to Chinese economic coercion; and assist like-minded partners and institutions in providing alternatives to those seeking infrastructure investments without the strategic baggage that accompanies [Belt and Road Initiative] investments.

If anything, “weaponizing Ex-Im” would worsen trade barriers and disadvantage the American firms that must compete against foreign companies enjoying U.S.-subsidized export financing. That is the case with airlines, mining, steel, and solar energy components, among other sectors.

Ultimately, Congress can (and should) resolve the protracted Ex-Im debate—and halt the rampant cronyism that the export subsidies perpetrate—by allowing the bank’s charter to expire and to phase out this Depression-era relic.