4 Takeaways From House Democrats’ ‘Medicare for All’ Hearing 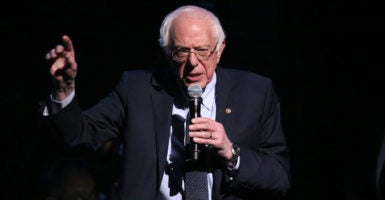 Sen. Bernie Sanders, I-Vt., is the sponsor of a "Medicare for All" bill in the Senate. (Photo: Manny Carabel/Stringer/Getty Images)

Democrats pushed their “Medicare for All” legislation in a hearing Tuesday before the House Rules Committee, saying it would provide health care efficiently to all Americans.

“Full room at the FIRST EVER hearing on #MedicareForAll today,” Rep. Pramila Jayapal, D-Wash., tweeted Tuesday. “A tremendous step in ensuring every single person in this country has quality and affordable health care.”

Jayapal is the House sponsor of Medicare for All legislation, while Sen. Bernie Sanders, I-Vt., is the sponsor of a similar bill in the Senate.

Sanders’ Medicare for All Act of 2019 could cost $32 trillion over 10 years and rob 181 million Americans of their private health coverage, asserted Robert Moffit, a senior fellow in domestic policy studies at The Heritage Foundation, in a recent op-ed.

Here are four takeaways from the hearing.

Dr. Farzon Nahvi, an emergency room physician at NYU Langone Health, testified that military veterans are satisfied with their health care through the Department of Veterans Affairs and argued that bodes well for switching to universal, government-run health care.

“I work at a private hospital, a public hospital, and I also work at the VA as well, and that has also been my experience, too,” Nahvi said. “Our VA system is wonderful, we provide excellent care, and I have never had a patient leave against medical advice because they were worried about the cost of their treatment.”

According to a 2018 report by CNBC, however, the VA has been plagued with problems for years, including “reports of excessive and contradictory spending, allegations of inadequate health care, a massive backlog of benefits claims, and a top leadership position that nobody can seem to hold down.”

“I think that our men and women in uniform have great care, and it’s a federally funded program where the doctors, they are employees of the government, and we … take care of patients in a great medical way and also in a financially responsible way,” he said.

2. Way to a Better, Fairer System

Medicare for All is the answer to rising health care costs and inadequate insurance coverage, testified Ady Barkan, a social justice activist.

Barkan started two programs at the Center for Popular Democracy—the Fed Up campaign and the Local Progress network—and is the founder of a political action committee called Be a Hero.

He said he was diagnosed with amyotrophic lateral sclerosis, or ALS, at age 32.

“Medicare for All will deliver to everyone living in America the high quality care that we deserve,” Barkan said in prepared testimony, adding:

The law will provide comprehensive care, including primary and hospital care, dental, vision, reproductive, and mental health care. We will all be allowed to see the doctors and specialists we want. And, crucially, the program will provide for long-term services and supports that will allow people like me to stay in our homes and communities, with the people we love. This will dramatically improve life for the tens of millions of people whose families include older or disabled people.

Barkan said Medicare for All would “save the American people enormous sums of money,” despite the estimated price tag of $32 trillion over 10 years.

3. Anticipated Shortage of Over 120,000 Physicians

Grace-Marie Turner, president of the Galen Institute, testified that an already expected shortage of physicians would be compounded by Medicare for All.

“A new report from the Association of American Medical Colleges finds that, even under our current health system, the U.S. will see a shortage of up to nearly 122,000 physicians by 2032,” Turner said in prepared testimony. “The demand for physicians is expected to grow faster than the supply, and rural areas will be hit especially hard, according to the report.”

She added that cuts in payments to care providers in Jayapal’s bill “are likely to exacerbate this trend as more physicians close their practices or otherwise withdraw because of the payment reductions.”

Medicare for All also would lead to a deterioration in the quality of health care, Turner testified about Jayapal’s legislation.

“We do know from the experience of other countries that global budgets, such as would be implemented under HR 1384, and associated centrally determined benefit structures lead to rationing, waiting lines, and lower quality of care,” she said, adding:

These and other forms of rationing seriously compromise access to care.

While patients in countries with nationalized health systems say they value their access to free care, many pay a very high price in other ways. Tragically, it is often the most vulnerable who are left behind when demand for services outpaces resources.

Alfredo Ortiz, president and CEO of the Job Creators Network, said in a statement provided to The Daily Signal that Medicare for All would be a step toward socialism.

“This is just the latest evidence that Democrats in Congress are being rapidly consumed by socialism. ‘Medicare for All’ is socialism by any other name,” Ortiz said. “It’s a government takeover of private health insurance, which over 200 million Americans rely on, including 38 million small business employees.”