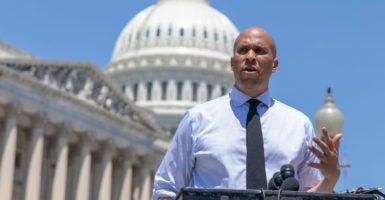 Three Democratic senators revealed on Earth Day that they are launching the Environmental Justice Caucus in the Senate to raise awareness and address environmental justice issues such as “systemic racism” and “discrimination.”

“We cannot achieve economic justice or social justice in this country without also addressing environmental justice,” New Jersey Sen. Cory Booker said in a statement released Monday. “The fact that communities of color, low-income communities, and indigenous communities across the country disproportionately face environmental hazards and harmful pollutants on a daily basis has been ignored for far too long.”

“Every American has the right to breathe safe air, drink clean water, and live on uncontaminated land regardless of their ZIP code, the size of their wallet, and the color of their skin. However, too often that is not the case, especially for low-income communities and people of color,” Illinois Sen. Tammy Duckworth continued.

Booker, Duckworth, and Democratic Delaware Sen. Tom Carper announced that the caucus will work in conjunction with the House Environmental Justice Task Force, which is comprised of members from the Congressional Black Caucus, Congressional Hispanic Caucus, and the Asian Pacific American Caucus.

“The caucus will raise awareness of the many environmental and pollution issues that have created public health challenges, which disproportionately impact low-income communities and communities of color,” the statement read. “The caucus will help those communities advocate for themselves with the federal government by providing expertise and assistance, generate legislation, and organize hearings and events.”

None of the three senators voted in favor for the Green New Deal in March, a stimulus program that aimed to address climate change and economic inequality.