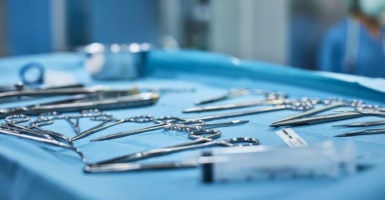 If there’s one thing the far left has excelled at, it’s making you pay for its radical policies, whether or not it has the money for it. In Illinois, a state known for its persistent fiscal troubles, the Department of Healthcare and Family Services recently announced its intention to begin covering gender reassignment surgeries under the state’s Medicaid program.

In a press release, Democratic Gov. J.B. Pritzker claimed the new policy is “cost effective, helps avoid long-term health consequences, and most importantly, is the right thing to do.”

The department has yet to finalize the new policy. After a public comment period, the agency expects the new policy to be in place this summer. The announcement claims the new policy will allow individuals 21 years and older with a diagnosis of gender dysphoria to access taxpayer-funded surgery in an attempt to change a person’s gender.

What’s not clear is how invasive, irreversible, cosmetic surgery on an individual’s genitalia and breasts can help someone struggling with a mental health illness like gender dysphoria from avoiding the sort of long-term health consequences Pritzker mentioned.

According to a 2016 study by the Centers for Medicare & Medicaid Services, which analyzed 33 studies between 1979 and 2015 related to the question of whether gender reassignment surgery is medically necessary: ” … there is not enough high quality evidence to determine whether gender reassignment surgery improves health outcomes for Medicare beneficiaries with gender dysphoria and whether patients most likely to benefit from these types of surgical intervention can be identified prospectively.”

Apparently, Pritzker knows something the experts at CMS, and their exhaustive study on this topic, don’t.

Sadly, this trend of using taxpayer dollars to pay for medically unnecessary procedures is par for the course in Illinois. In September 2017, former Illinois Republican Gov. Bruce Rauner signed a bill that allows abortion coverage through the state Medicaid program. The passage of this bill was celebrated by the likes of Planned Parenthood and the ACLU.

At the time, the state was working through budget shortfalls, yet decided to go through with legislation that could lead to $30 million in new taxpayer funding for abortion. Not only does this new law bring economic consequences, but it also forces Illinois taxpayers to subsidize the killing of innocent children.

Make no mistake, this is not just an Illinois problem. It’s the modus operandi of the left. When it can’t pay for its radical policies, it won’t leave it—or you—alone. That’s why elections matter. That’s why those of us who truly care about properly treating mental health and who care about the unborn need to stay vigilant in our states.