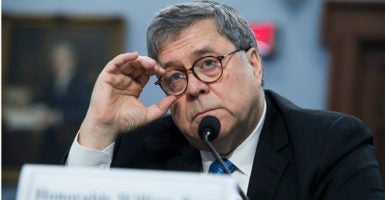 The special counsel’s report on Russia’s election meddling will be released with redactions within a week, and the results of a separate probe into alleged Justice Department misconduct is coming within two months, Attorney General William Barr told a House panel Tuesday.

House Democrats, who weren’t happy to hear about redactions in special counsel Robert Mueller’s report, also grilled the attorney general on other issues such as the Justice Department’s position on states’ litigation over Obamacare.

Barr delivered an opening statement on the Justice Department’s budget priorities, under the purview of the House Appropriations subcommittee. Aside from that, though, there was little talk about fiscal issues.

In the next two months, the Justice Department will complete an internal investigation into domestic spying on former Trump campaign aide Carter Page, Barr said.

Some contend that the Obama administration action started the Russian probe, and Republicans on the House Intelligence Committee argue the basis for the warrant to surveil Page was an unverified opposition research document written by a former British spy, Christopher Steele.

Barr said DOJ Inspector General Michael Horowitz is looking into the question of whether officials abused the Foreign Intelligence Surveillance Act, or FISA. Horowitz is being aided in the probe by John Huber, U.S. attorney for the District of Utah.

“The Office of the Inspector General has a pending investigation of the FISA process in the Russia investigation,” Barr told lawmakers. “I expect that that will be complete probably in May or June, I am told.”

Last week, Rep. Devin Nunes, R-Calif., ranking member of the House Intelligence Committee, made a criminal referral to the Justice Department seeking an investigation into alleged misconduct by the Justice Department and FBI during the initial Trump-Russia probe in 2016, well before Mueller’s appointment as special counsel.

One day after Barr’s letter about the conclusions of the Mueller report, Senate Judiciary Chairman Lindsey Graham, R-S.C., called for a new special counsel to look into the origins of the Trump-Russia probe.

“I am reviewing the conduct of the investigation and trying to get my arms around the aspects of the counterintelligence investigation that was conducted in the summer of 2016,” Barr said.

Subcommittee Chairman Jose Serrano, D-N.Y., stressed the need for Barr to make the full report public, despite law and regulations preventing that because of considerations such as the presumption of innocence and grand jury deliberations.

“The American people have been left with many unanswered questions; serious concerns about the process by which you formulated your letter; and uncertainty about when we can expect to see the full report,” Serrano said during the hearing.

“I believe the American people deserve to see the full Mueller report, and to be trusted to make their own determinations on the merits based on what the special counsel has presented,” he said.

The special counsel determined that neither Trump nor his campaign nor any American conspired with Russians to affect the election, Barr wrote, but did not make a determination on whether Trump tried to obstruct justice.

“This whole mechanism for the special counsel, as I said, was established during the Clinton administration in the wake of Ken Starr’s report,” Barr said, adding:

That’s why the current rule says the report should be kept confidential, because there was a lot of reaction against the publication of Ken Starr’s report, and many of the people who are right now calling for release of this report were basically castigating Ken Starr and others for releasing the Starr report. …

You will recognize that I’m operating under a regulation that was put together during the Clinton administration and does not provide for the publication of the report, but I am relying on my own discretion to make as much public as I can.

Although some Democrats said they wanted a quicker release, Rep. Nita Lowey, D-N.Y., said she wanted to know how the attorney general distilled 300-plus pages of the Mueller report into a four-page letter to Congress in such a short time.

“You received a serious, detailed report and released your memo in less than 48 hours,” said Lowey, who is chairwoman of the Appropriations Committee. “To me, to do this, it seems like your mind was made up.”

Barr replied that the findings were not a surprise because top Justice Department officials had met March 5 with Mueller.

The attorney general said the report that goes public will redact grand jury information, national security secrets, information that touches on ongoing investigations, and information that would harm the privacy or reputation of peripheral figures in the probe.

Barr added that he would return to Capitol Hill to testify to both the Senate and House judiciary committees about the report as quickly as the committee chairmen—Graham and Rep. Jerry Nadler, D-N.Y.—wanted him to.

“The DOJ’s policy and practice is that [if] we don’t charge someone then we don’t go out and discuss the bad and derogatory information,” Barr said.

Barr seemed not to be clear at times during the hearing as to whether the White House had prior knowledge of the findings of the Mueller report. Eventually he said the Justice Department notified the White House counsel’s office before releasing the four-page letter to Congress and the public.

“From my standpoint, within a week I will be in a position to release the report to the public,” Barr told the panel.

But he replied to several other questions with words such as “I’m not going to say anything more about it until the report is out.”

The Justice Department offered the Mueller team a chance to review the letters to Congress, and the special counsel declined, Barr said.

He stressed that the four-page letter was about “bottom-line conclusions,” which is not the same as a summary.

“I was not interested in putting out summaries or trying to summarize, because I think any summary, regardless of who prepares it, not only runs the risk of being underinclusive or overinclusive, but also would trigger a lot of discussion and analysis that really should await everything coming out at once,” Barr said.

“The conclusions were simple: no collusion, no obstruction,” Graves said. “Is there anything new you have seen that would change your conclusions?”

According to Barr’s letter, the Mueller report did not “exonerate” Trump of obstruction of justice but also did not find he had committed obstruction.

In response to Graves’ question, Barr replied: “No, I tried to use much of the special counsel’s own language that I could. The letter speaks for itself.”

Democrats also were upset that the Trump Justice Department took the side of state attorneys general who sought to scrap the Affordable Care Act, better known as Obamacare.

When the Supreme Court upheld the law in 2012, it did so on the basis that Obamacare’s individual mandate—which required Americans to buy health insurance—was a tax.

Now, following congressional action, the mandate is gone. Without it, GOP state attorneys general contend that the law is not constitutional. They already have won in federal district court.

Rep. Matt Cartwright, D-Pa., warned: “If the Supreme Court granted you credence to your position and sweeps away the health care law, would the DOJ support a stay of that ruling until Congress [and] the president can formulate a plan?”

Barr said if it is a matter of policy, that’s up to Congress and the president to decide.

“From my experience, the Supreme Court would deal with that in their opinion,” Barr told Cartwright.

Cartwright repelied: “I’m dismayed to hear you would just let our health care go off a cliff.”

The job of the Justice Department is to review legal issues, the attorney general said.

Serrano later lectured Barr for not defending Obamacare, saying, “It’s very troublesome to see a Justice Department against the law of the land.”

As illegal immigrants continue to pour across the southern border, Barr said the department is doing what it can to handle the matter.

“I personally believe an important part in securing the southern border is having a barrier system on the border,” Barr told the subcommittee.

Last month, with Congress unwilling to pay for new fencing or walls, Trump declared a national emergency as a means to move money in the military budget to pay for construction of a border wall.

Lowey and other Democrats on the House panel were critical of family separations in 2018, although they also occurred under President Barack Obama. Barr said family separations no longer are happening, and sought to explain the administration’s “zero tolerance” policy for illegal border crossings.

“There’s a lot of misunderstanding to the zero-tolerance policy. The president has put out an executive [order] that the DHS will not follow that [family separation] policy,” Barr said.

He later added: “I support the president’s policy that we will not separate children from their parents.”

Congress still must fix the asylum system, which encourages people to enter the country and make asylum claims that cannot be adjudicated in some cases for years, the attorney general said.

“The problems with the asylum laws is one of the chief factors,” Barr said. “When people are released into the country and never show up [before immigration judges], that prospect is what is bringing people from Central America. We need to have reform, as the president has said repeatedly, of immigration laws and discourage people from coming [unlawfully] to the U.S.”