Senate Republicans Have Triggered the ‘Nuclear Option.’ They Are Completely Justified. 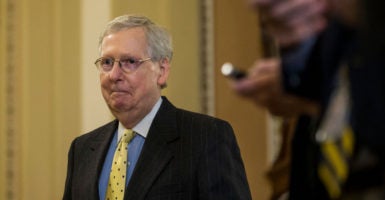 Most people agree that our system of government depends on an informed, participating citizenry. It can be hard enough to understand what Congress is doing, but it’s even harder to grasp how Congress operates.

And yet, rules that govern how things get done often determine what those things end up being. As such, it’s very important that Americans understand how the Senate majority just changed—and hopefully, improved—the process for debating the president’s nominations.

Senate Republicans on Wednesday, in a pair of 51-48 votes almost entirely along party lines, revised one part of that process. The move will expedite the confirmation process for President Donald Trump’s district court nominees and sub-Cabinet posts at federal departments and agencies.

The Constitution doesn’t say much about this process, only that the president needs the Senate’s “advice and consent” before he can appoint someone he has nominated.

The process of the Senate evaluating nominees and deciding whether to give its consent is often called the confirmation process, and it operated pretty smoothly for nearly two centuries.

But as the federal government grew in size and power, the appointment of those who lead it has become more important and, therefore, more contentious.

Though designed to be the weakest branch, the judiciary has in recent decades become the strongest. Its power to determine what our laws mean is magnified because judges do not have limited terms. Once they are appointed, they serve until they decide to leave, an average of nearly 25 years.

As a result, the judicial confirmation process has become particularly difficult. Until the past couple of decades, 96% of federal judges were confirmed without even a roll call, or recorded, vote, and 97% had no opposition at all.

Final confirmations by the full Senate, however, are off the pace. The cause is an organized campaign, utilizing several specific tactics, by Democrats and their liberal allies to make the rest of the process as slow and cumbersome as possible.

Senate Republicans have now neutralized one of those tactics.

Senate Rule 22 provides for a process to invoke cloture, or end debate, which is necessary before the Senate can vote on confirmation.

Even when the Senate votes to bring debate to a close, however, Rule 22 allows up to 30 more hours of debate.

Democrats had abused that part of the Rule 22 process. First, they refused to shorten that 30-hour period of debate even for nominations they didn’t intend to oppose. Second, they almost never actually went to the Senate floor and debated the nomination being considered.

That was just empty time, with the clock ticking for no purpose other than delaying the inevitable. Nominations that would have been confirmed in a few hours took several days.

On Tuesday, Senate Majority Leader Mitch McConnell gave Democrats a final opportunity to dial back such obstruction. The Kentucky Republican brought up a resolution to shorten post-cloture debate for most nominations with limits very similar to those the Senate voted 78-16 to adopt for the 113th Congress (2013-14).

Democrats supported those limits when they ran the Senate under President Barack Obama, but filibustered them now that they are the minority under Trump.

On Wednesday, McConnell achieved the same reform in a different way. He proposed lower limits on post-cloture debate, not in the form of a written resolution, but as a “point of order,” or a question of procedure that required an answer from the Senate’s presiding officer.

The full Senate then voted on whether to endorse the presiding officer’s decision. McConnell used this approach because it could not be stopped by a filibuster the way the resolution had been the day before.

Remember, that is the very last step before a final confirmation vote. The Senate has already voted, often overwhelmingly, that it wants to end debate. Making that final period of available debate a little shorter is not, in the big scheme of things, a significant step.

It can, however, have a significant impact. When similar debate limits were in place in 2014, the Senate confirmed 89 judicial nominations, the second-highest annual total in American history.

Even if Democrats continue forcing the Senate to use the formal Rule 22 process to end debate, the Senate will be able to do so for more nominees in a shorter period of time.

Today, 142 positions across the federal judiciary are vacant, the highest number since June 1991. Of those vacancies, 90% are on the U.S. District Court, the lowest level of the judiciary, where every case must begin.

No business or organization could function properly if 17% of its workforce was absent, yet that is the condition of the federal judiciary today.

The bottom line is that the Senate’s process for considering nominations has become too divisive and subject to abuse. The judiciary, and the American people who depend on it, suffer as a result.

While controversies can arise about an individual nominee here or there, the process must be less cumbersome for the large majority, who should be easily confirmed.

Republicans have, in effect, opened one of the gates that have kept the process backed up. They need to seize this opportunity so that the government that Americans elected in 2016 can function as it should.