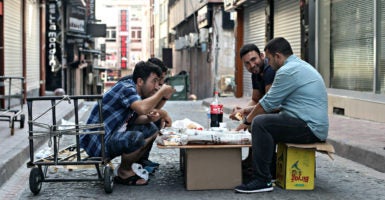 These men pictured Aug. 20, 2016, are among about 300,000 Syrian refugees living in Istanbul, Turkey. One study found it costs 12 times more to resettle refugees here rather than their home region. (Photo: Raddad Jebarah /Zuma Press/Newscom)

Are you concerned about the plight of international refugees? Would you like to see the U.S. government take decisive, constructive action on behalf of displaced persons across the globe who have been forced to flee their homes?

If so, you’re invited to “stand up against the voices of intolerance” this Sunday in Washington, D.C., where you can join forces with other concerned Americans.

But if you do participate, policy analysts who have examined the refugee crisis want you to know they have good reason to believe the rally is a highly politicized event organized for the purpose of lobbying the Obama administration and Congress to allow more refugees into the U.S.—including those from war-torn Syria and Iraq who may have ties to terrorism.

A major contributor to causes on the left, the Tides Foundation, is collecting contributions for the rally.

President Barack Obama said he would boost the number of Syrian refugees admitted into the U.S. to 10,000  for the fiscal year beginning last October and ending this Sept. 30. As of June, about 2,800 Syrians had resettled in America, according to Pew Research Center.

But after a slow start, the administration is poised to meet or surpass its goal of admitting 10,000 Syrians, Anne Richard, assistant secretary of state for the Bureau of Population, Refugees, and Migration, told reporters in a conference call earlier this month.

Skeptics, worried about the effects on the economy and the difficulty of screening for terrorists, point to studies showing resettlement of refugees in the U.S. rather than the Middle East is both costly and counterproductive.

A report by the Washington-based Center for Immigration Studies found that it costs 12 times as much to resettle a refugee in America than it does to provide for services and relief to the same refugee in the Middle East.

The nonprofit, nonpartisan research outfit included State Department expenditures, welfare use rates, and other figures and benefits from the departments of Health and Human Services, Housing and Urban Development, and other U.S. agencies. Its report says:

Based on that information, this analysis finds that the costs of resettling refugees in the United States are quite high, even without considering all of the costs refugees create. We conservatively estimate that the costs total $64,370 in the first five years for each Middle Eastern refugee. This is 61 times what it costs to care for one Syrian refugee in a neighboring country for a single year or about 12 times the cost of providing for a refugee for five years.

“The organizers, funders, and the supporting groups are putting this rally together to exert pressure to ensure that the Obama administration increases the admission of Syrians into the U.S.,” Mark Krikorian, executive director of the Center for Immigration Studies, told The Daily Signal.

For their part, the rally’s organizers insist they have put together a genuine grassroots movement of concerned citizens who want the U.S. government to assume a leadership role in ongoing efforts to alleviate the refugee crisis. This point is made on the rally’s website:

As borders have closed to those fleeing war and violence and as the voices of fear and intolerance have grown louder, we will not let politics or fear stand in the way of our compassion. We urge the United States government to uphold its founding principles and its traditional leadership role in refugee protection by further assisting the countries that are carrying the heaviest burden of the ongoing crisis. We believe that every act of rejection is an affront to humanity and every act of compassion a reminder of what is best in each and every one of us.

The website created for the rally lists the San Francisco-based, nonprofit Tides Foundation as a fundraising vehicle. The foundation and its sister organization, Tides Center, are major benefactors of “left wing” causes for more than 30 years, according to the Capital Research Center, which investigates the “aims and activities of left-liberal special interest groups.”

“Tides’ grantmaking is in the same league as George Soros’s Open Society Institute,” a Capital Research Center report states. “From 1999 through 2008, Tides distributed $630.6 million in grants, a sum within hailing distance of the Open Society Institute’s $901.4 million, according to FoundationSearch.com records.”

Soros is a major funder of National Immigration Forum, a group advocating amnesty for illegal immigrants that is listed as an organization supporting the rally.

The website encourages participants to purchase an orange or white T-shirt with the logo of the DC Rally 4 Refugees, set to take place from 10 a.m. to 2:30 p.m., rain or shine, at the Sylvan Theater near the Washington Monument.

The website also asks supporters to donate to the rally through the Tides Foundation, listing its address and a fund number.

In response to an inquiry from The Daily Signal about the role of Tides, rally spokeswoman Lauren Cozzi said in an email:

Cozzi also said the DC Rally 4 Refugees organization “was founded by a grassroots group of advocates inspired to help after volunteering directly with refugees fleeing war and violence in Syria, Iraq, Afghanistan, and other regions.”

‘We Can Each Make a Difference’

The United Nations Refugee Agency’s figures show more than 65 million people throughout the globe have been forced to leave their homes in response to armed conflict, political persecution, and other extreme circumstances. About 21 million of them are refugees, according to the U.N.

The rally website describes the international refugee crisis as the worst since World War II:

Nearly 5 million human beings have fled Syria alone since the start of its civil war in 2011 and are now living in limbo in neighboring countries. In addition, millions of Iraqis and Afghans have fled their homes under the threat of violence. Millions of refugees from Somalia, South Sudan, and elsewhere also need protection and assistance.

Rally organizers’ volunteer efforts in trouble spots around the world provided them with the impetus for Sunday’s event.

“After seeing the scale of human suffering with my own eyes while volunteering in Lesvos, Greece, I realized I had to help refugees in any way I could,” Kathy Hertz, founder and executive director of DC Rally 4 Refugees, said in a press release. “Despite having no idea how I would finance a rally, I trusted in my desire to educate people about the global refugee crisis and show how we can each make a difference.”

Many people have shared with me their desire to help refugees, but did not know how to do so. I founded DCRally4Refugees to give them a way to help, provide tools, and create a large coming together of people for increased safe refugee resettlement and support. On the one-year anniversary of the drowning death of Aylan Kurdi, the young boy whose photo shocked the world, we unfortunately cannot say that things have changed. Refugees are still risking their lives daily and too many of them are dying in the process. I know we can do better.

Almost 10,000 displaced persons have drowned while attempting to cross from Turkey to Greece and Libya to Italy, according to the rally website.

‘Timed to Influence the Number of Refugees’

Asked by The Daily Signal to comment on the organizers’ policy objectives, Cozzi, the rally spokeswoman, said: “DCRally4Refugees will raise awareness about the global refugee crisis and urge U.S. action—at home and overseas—to alleviate suffering through relief efforts and refugee resettlement.”

Noting the rally will take place near Capitol Hill, the website said participants “will call on the U.S. to provide more refugee resettlement and increased support to countries and organizations already involved, support proven relief efforts overseas, and offer resources for those who wish to help, raising a collective voice against intolerance.”

Krikorian, of the Center for Immigration Studies, said he sees more than mere happenstance at work in the timing of the rally: Obama is set to play host to a refugee summit at the U.N. on Sept. 20. The president also is expected to release his fiscal year 2017 plan for refugees by the end of September.

The rally is not only “to exert pressure to ensure that the Obama administration increases the admission of Syrians,” Krikorian said, but “timed to influence the number of refugees the State Department is trying to settle.”

Krikorian told The Daily Signal that he makes a critical distinction between refugees and additional Syrians who may be brought to the U.S. from countries, often in Europe, other than Syria:

Once they leave those countries they are basically just looking for a better job. … It seems to me the administration has not made a persuasive case for why any of these people should be brought here, especially since our research shows it costs 12 times as much to take care of a refugee here than it does to take care of them in the Middle East.