Why the Next FDA Chief Shouldn’t Block Alternatives to Cigarettes 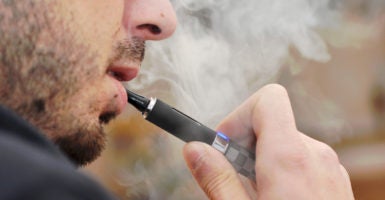 E-cigarettes have been found to be roughly twice as effective in helping smokers quit as other smoking cessation products, such as nicotine patches. (Photo: Martina Paraninfi/Getty Images)

Will the federal government block solutions that may help cigarette smokers kick their habit?

The next commissioner of the Food and Drug Administration, who will be chosen to replace the soon-departing Scott Gottlieb, will have to answer that critical question.

In a 2017 announcement, the FDA welcomed tobacco harm reduction and innovative solutions to help people quit smoking. Tobacco harm reduction is the simple idea that there could be significant benefits when smokers switch to less harmful means of getting their nicotine.

That doesn’t mean alternative products, such as e-cigarettes, have zero risk, but they do appear to have less risk than smoking cigarettes.

In the most comprehensive government report of its kind, Public Health England described e-cigarettes in 2015 as “95 percent less harmful than tobacco cigarettes.”

Further, in a major study released in January, e-cigarettes were found to be about twice as effective in helping smokers quit as other smoking cessation products, such as nicotine patches.

The FDA, however, hasn’t embraced these innovative alternatives to delivering nicotine. Instead, it has used concern over youth usage of e-cigarettes to create a narrative that demonizes these products and to push intrusive government intervention.

For example, the FDA is trying to effectively ban the sale of flavored e-cigarettes (excluding tobacco, mint, and menthol flavors) in convenience stores, gas stations, and other retailers.

The FDA’s draft proposal is not very specific, but as reported, it would require brick-and-mortar retailers selling such products to prevent minors from entering stores or have physically separate rooms to sell these age-restricted products.

That action is allegedly designed to address concern over flavors appealing to kids. However, there’s strong research indicating that flavors are also extremely important to adult smokers and their decision to quit smoking. The FDA seems to ignore that latter point.

Youth usage of nicotine-delivery products should be a concern. That same type of concern also exists for other products that are not intended for kids, such as cigarettes or alcohol. Yet, there’s rightfully no federal intervention of this magnitude to make it impossible—or at least extremely difficult—for retail outlets to sell these other legal products.

Ironically, it would be easier to sell cigarettes than these products to help people quit smoking.

If enforcement remains a concern, that’s a justification for thoughtfully working on solutions, not an excuse to severely restrict the sale of legal products.

The FDA, however, hasn’t taken that path. It has been so focused on the costs of allowing the sale of e-cigarettes, it has failed to analyze the costs of not allowing (or restricting) their sale.

How many smokers could suffer from disease and even early death if they were not able to get access to products that could help them stop smoking?  That question might seem extreme, but it reflects what could be at stake.

The FDA should be allowing private solutions that reduce the amount of cigarette smoking, not leading efforts that would help maintain it.

This entire issue might seem like a major problem for Gottlieb’s successor as FDA commissioner, but it isn’t a problem, so much as an incredible opportunity. There are now real and effective products to help smokers quit.

The next FDA commissioner should embrace this opportunity and craft a path that would allow smokers to have easy access to these important products, while still taking appropriate and reasonable steps to ensure that youth don’t gain access to them.